I Only Have Fangs For You
Pooooor silly, sweet and sinfully sexy Sebastian…all befuddled because he can’t stop thinking about the off-beat waitress that now works for him. Not his usual cup of tea (he prefers the super-model types), the klutzy, overly pale (even for a vampire) messy haired, bespeckeled female has definitely caught his attention.

“Nadine, I appreciate your decision, but I’m not sure she’s cut out for a job here. I mean look at Greta.” He gestured to the leggy blonde, , leaning on the end of the bar chatting with Crystal, a curvy brunette. “And Crystal. Our cocktail waitresses are part of the allure of the place. They are supposed to be a draw for the patrons.”

“Give her a chance. This is where she needs to be,” Nadine said, certainty in her husky voice.

Sebastian studied his right-hand woman and friend. Finally, he nodded. Nadine was a good judge of character, another trait of werewolves. Animal instincts and all that. And he’d trusted her for years with all his hiring. It didn’t make much sense to question her now.

Wilhelmina Weiss (Mina) is an unskilled, bashful and easily frightened “young” vampire. She gets hired to work at his bar, but with the intention of putting Sebastian (and his fangs) permanently out of business. Hateful of her kind, she joins a “Society for Preternaturals” that focuses on integrating with humans. Their goal: to stop all of their normal (yet unacceptable) behaviors that would frighten humans. Sebastian, known for being a wild child and glutton for sexy human females (and their blood) MUST be stopped!

As she botches multiple sabotage attempts (did I mention she was unskilled especially in the paranormal aspect), Sebastian quickly realizes what his new waitress is trying to do.

Suddenly her irritation with his cavalier behavior was too much. For the first time since she’d met him, Wilhelmina did something clumsy that she fully intended. As she picked up another glass, she clanked the stem against Becky’s full cocktail. The glass soared over and pink liquid splashed down the front of Sebastian’s pale blue designer shirt.

Sebastian jumped up as what appeared to be a Mai Tai with extra cherries soaked into the material of his shirt and the crotch of his trousers.

The women in the booth handed him their drink napkins as he attempted to pat away the worse of the spill.

Sebastian looked up from the wet splotches to see something akin to a smirk on Wilhelmina’s lips. As soon as she realized he was looking, the smile faded into an expression of innocent dismay.

But Sebastian knew what he’d seen.

Despite his aggravation towards her treachery, he is even more astonished that a female could actually NOT want him. Also grasping that she is yet another self-loathing vampire, he is determined to find out what her problem is and makes a deal with her. No biting any humans for one month, if she allows him to teach her how to be (and love being) a vampire.

Inevitably, their close proximity forces them to open their eyes and see beyond the exterior shell protecting an innermost being that one cannot help but to love. But they struggle…boy do they struggle…

One of my favorite parts (when Mina sees Sebastian with another woman, not realizing it his interior designer):

“I want to end the deal,” she said flatly.

She looked up at him, misery clear in her blue eyes. He was the one making her this unhappy. The idea killed him.

“Baby,” he murmured, touching her cheek. “Tell me what’s going on, please.”

She closed her eyes, then straightened her spine against his soft, rich voice. Then she met his gaze directly. “If you are meeting women, mortal women, then how do I know you aren’t biting them? There’s no way for me to know. You could have bitten evert woman every night since we made the deal. I’d be none the wiser. And – I just can’t…I just can’t do,” she gestured to them, “this. The deal is done.”

She didn’t answer, but she was sure her miserable expression said enough.

Despite her obvious angst, the idea made him feel like giving a triumphant whoop.

“Why are you smiling?”

He tried to be sober, but he couldn’t.

“It’s cruel to enjoy someone else’s distress,” she informed him primly.

“Oh baby,” he said sincerely, “I’m only enjoying it because this is a major breakthrough.”

She eyed him as if she thought he was mad.

“If you are jealous, then you must like me a little bit.”

“Yes,” she admitted, with a begrudging roll of her eyes.

“I’m really glad about that. Because I have to admit, I like you a little bit too.”

See? Fun!! Kathy Love is all about the preternaturals residing in a human world. They do human activities (some…a touch more on the “animalistic” side 😯 *blush*), they interact with the mortals, they go watch live bands, get into fistfights, have insecurities, hug and cry, but yet they have that powerful ethereal aspect that we crave so much!

And…it’s yet another provocative installment, but again, the author makes you work for the “prize”.

Never fear however, as she has the ability to turn a simple *kiss* scene into a steam inducing, mind blowing, highly satisfying moment, so it’s all good 😉

He made a noise somewhere between a chuckle and a groan as his mouth caught her again.

Go slow, he told himself and managed to maintain gentle, brushing kisses. Velvet against velvet. He continued his tender onslaught until the need inside him swelled to the point that he had to touch more if her.

She groaned as if she was reading his mind and moved closer to him.

“Are you okay?” Sebastian asked, his lips not fully leaving hers, even though he didn’t sense fear.

My one embarrassing moment? When a major twist in the end smacked me in the forehead…I shoulda seen it coming, and am quite distressed actually that I didn’t, not even one time, clue in. How? Was I that enthralled with Sebastian that I saw nothing else? Not even one of the numerous clues that she dropped throughout the chapters (and one extra clue that I had simply because I’m a latecomer to the series).

Looking back…I’m just…it’s shameful really :roll:. I find that I do that alot. While people are busy picking apart a storyline to discern what’s to come, I nonchalantly bumble along for the ride with no concern as to what I might run into. But it does make for some impact when the realization hits, so that’s always fun! 🙂 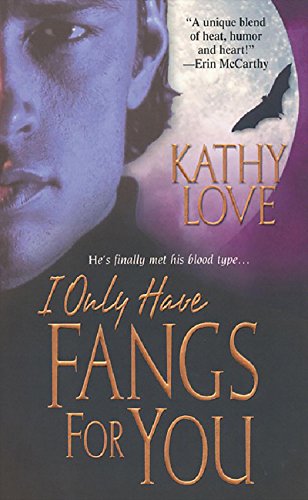 HAHA you are so cute! I love the little eye rolling guy and the bug eyes. I am totally going to pick up some Kathy Love. You keep telling me about her books but I keep forgetting to pick them up. I will not forget this time. And Ok is it just me or am I a sucker (pardon that pun) for the silly titles? I only have fangs for you? I am going to be getting the side eye in the store again I know it! Oh well!