Idol (VIP Book 1)
This one started off as the ultimate rock star fantasy loaded in steam and SWEET! Because… you just KNOW (in real life!) that actually “meeting” your favorite rock star is a far-fetched fantasy.

And even if you did finally meet them, they’d likely not remember you or even take the time to get to know “you” in the onslaught of fans meeting them too. It’s understandable. As personable as they may be, someone in the limelight, that is constantly surrounded, develops a certain distance… maybe even ambivalence to that kind of environment.

But this book pulls us out of that rock-star bubble (at least temporarily) and allows the reader to experience two people, without the media scrutiny and fanfare… and especially without the star-struckness that many a jaded rock star cringes from, and lets them just… be. Know each other like any two strangers-that-become friends might know each other.

This is THAT book.

Lisa: I loved it….perfecto pure rock star fantasy. Some really sweet moments, a tinsy tad of angsty moments and some wonderful music/lyric references. Great CR read. I five starred it….just what I was in the mood for. Nothing to taxing.

Grey: Finished Idol, cute, fun read. Low on the angst scale. But I am ready for something to rip me up, rivet me… I need 5 stars…

Cheryl: I just finished Idol. I love the way Kristen Callihan writes. Although it started out a little slow, it certainly picked up, and had a snarky h, named Liberty Bell

who had me cracking up with her comments and interactions with Killian. It also had a little angst. The sample at the end for the next book has me stalking her website for a release date.

Imagine discovering a drunk, bad-ass looking hottie named “Killian” (although maybe he wasn’t so hot right then) passed out on your lawn? He’s goofy, and you attempt to take care of him, grumbling all along, ’cause you like your reclusive privacy life, and now this “Lawn-bum” needs your help. He smells, his hair is too long, and he ruined your lawn with his crashed motorcycle.

She is definitely not a hot bumpkin. No Daisy Dukes on this chick. Her plump ass hides under ratty jeans with holes in the knees as she stomps around in heavy black boots better suited for my bike— the bike I’m pretty sure is wrapped around her fence. I don’t remember crashing and haven’t got a scratch on me. The will of the universe is a strange thing. Why it brought me to her of all people, I don’t know.

But he’s incapacitated, and she’s just not the type to turn away someone in need, no matter how badly she wants to.

Initially the heroine bemoans… but then eventually befriends her new neighbor. They tease each other. They do fun garden-farming stuff together.

Across the way, Liberty stomps down her porch steps, heading toward a high-fenced-off high-fenced-off vegetable garden. A smile pulls at my lips. The girl never just walks. Wherever she goes, it’s like she’s embarking on a mission of doom.

They laugh and eat together. They argue. They talk about their pasts. Why they are… WHO they are now. They snuggle. They’re just… normal people. Just… the two of ’em in their normal people bubble.

I’ve sunk into a pattern of enjoying his company and then waiting until he returns to me. I swear, I seem to be waiting for him even in my sleep, my thoughts consumed with all things Killian— what is he doing? What’s he thinking now? When’s he coming over again?

The annoying thing is that I was perfectly content before he came. My life had a pattern and was comfortable. Reliable. Now, it’s anything but. Everything is driven by this push of anticipation for him.

And while at first he’s not attracted to her very “plain jane” self, getting to know her… and eventually catch her singing her heart out, he becomes star-struck, himself.

“Who are you that those girls would recognize you?” Jesus, is he some infamous criminal released on a technicality? “Is Killian your real name?”

I sound a touch panicked, and he gives me a measured look. “Yes, it’s my real name.”

He points an accusatory finger at me. “You’re acting weird.”

I freeze in the act of topping off his already full cup of coffee. “Shit.” I wince and sit down. “I am. I totally am.”

“Well, stop.” His jaw clenches as he tosses down his fork. “It’s pissing me off.

“I’m sorry.” My hands lift in a helpless gesture. “I don’t mean to. It’s just, I keep thinking it.” He’s Killian James. In my kitchen. Mind. Blown.

He stares with eyes that seem to see right through me. Hurt clouds those dark depths too. “Not you, Liberty,” he says in a low, raw voice. “Okay? Just… Not you.”

OOOOOOOMPH!!!!!!! And how could you not?! I LOVED THIS PART THE MOST!!! It was so honest and realistic, and… I LOVE that she acted like I truly believe ALL of us would have, not matter how “normal” we once were…

Maryse: I just REALLY loved when she finally realized who he was. I loved the honesty in her reaction… how truly star struck she was and how hurt he was that she was changing because of it… I really like their friendship, and how it wasn’t immediate sex and such. Instead, they get on each other’s nerves, and I found that endearing.

Jan130: Yeah I liked that too, Maryse. There is a nice, real feeling about their friendship.

And that’s how I’d describe the whole first half of the book. Living the awesome REAL life of the human BEHIND the rock star. LOVED it! Definitely a slow burn, and I especially loved that she “wasn’t his type” in the least.

Long, straight hair the color of wet sand, gray eyes, and an oval face that should be all soft angles but somehow looks sharp and hard: Elly May is kind of plain. Until she opens her mouth.

Tee hee!!! He calls her “Elly May”. *snort* 😛 But getting to know her changed his whole world, too.

And I certainly enjoyed his “discovery” of her and the potential of that new plot twist.

But the dynamic changed. I was ripped out of my happy place, and thrust into the spotlight that moved too fast for me to be able to enjoy the angst that a rock star’s world could inflict on a potential girlfriend. And I bet had the whole thing been only from HER POV, I would have enjoyed it… NO. Experienced it, more. Fully. Intensely. Tumultuously, which in turn would have had me feeling and connecting, and reacting that much harder.

So because of that, I’ll say that I struggled with the 45% to 75% mark. Something about that part of their journey was just not holding my attention and I kept putting it down. It was good, but it was too easy on me, even with the angsty parts thrown in. Perhaps I begrudged leaving the intimate “bubble” and moving too fast into rock-stardom, and other… stuff.

And for awhile I was thinking this was a 3.5 star read (due to my lack of attention span issues in the middle), but the last quarter of the book got me back. I swooned and fumed, and giggled! The first half made the book (great intro!!). The last quarter saved it. But had it been 100% from HER POV? I can’t help but wonder if I would have devoured it, stressed over it, and screamed it from the rooftops when she was stressing, too… I bet I would have. 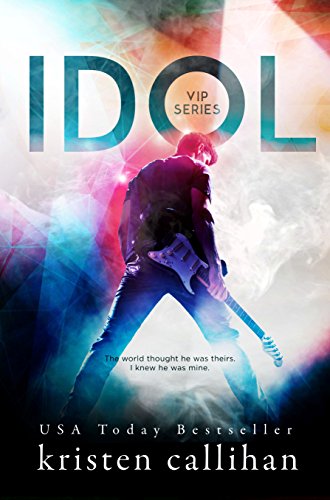 Completely 100% agreed. I 4 starred this one too… for many of the same reasons you did, I loved the slow burn… their friendship and the humor… oh, it was a beautiful thing.

Making him a rock star, woo – *giggle* – that, was just… genius! And man, can Kristen Callihan write some smut 😉 haha!

I think this was my first by her, Grey!!

Maryse, WHAT?!!!!! You haven’t read her Game On Series- The Hook Up, The Friend Zone, The Game Plan??!!!! I thought you had. If not, you need to read them asap. So GOOD.
I’m looking forward to the next book in the VIP series. That sample at the end of this book was hilarious. Can’t find any info on a release date yet.

I pretty much have only read Elle Kennedy’s sports guys… and I LOVE them so I have no idea why I haven’t tried the others. I’m so weird. 😉

Yeah I haven’t finished it yet. I liked the first section too, but then I found it started to drag a bit and I started skimming. It just seemed a bit too convenient to me that she had special talents (don’t want to give any spoilers) and she was the person he *happened* to move in next door to. Hmmmm. I think I might have liked it better if she was just an *ordinary* girl. Haven’t picked it up again yet. I’m at 47%. Maybe I should give it another shot if the ending picks it up again.

I really liked The Hookup and The Friend Zone by Callihan (sports-themed) but this one not so much, so far.

The Game Plan was a DNF for me as well. I just didn’t like the characters as much as the first two books, and couldn’t really get into it. But I’ve read the other two twice – really liked them.

Maryse you haven’t read Kristen Callahan’s Game On Seies?? I’m echoing Cheryl’s comment! Lol. A must read if you like Elle Kennedy. Kristen Callahan is an auto buy for me so far. This one was a good if not great read. 4.5 stars.