Marked. Part I: The missing Link
So… what would it be like having a seriously scary, brooding, angry potential “bad guy” in all of his scarred glory living right next door? Eeeeeep! But in book format? YAY!!!!

I loved how it started, I loved how she met him (her mom insisted she invite him over for Christmas dinner – poooor sweet scary-looking boy ;). I loved her mom!!),

“He’s all alone in that house. He never has anyone over. I’m sure he’s lonely.”

“Or a murdering psychopath,” Seth cuts in. “Have you seen him, Mom? That dude scares the crap out of me”

and I loved when he finally relented (although just a little at a time). Just the way I like it. Nice and slow-ish, with sweet innocent “touches” but when he decided she was his… watch out!!! Angry alpha male that suddenly was the sweeeeeeeetest thing in disguise.

The door opens and he cocks his head to the side, looking confused to see me there, “Didn’t scare you off the first time?” His voice doesn’t have the same gruffness from before. This time it’s warmly inviting.

But he would turn right back to freakishly-scary (even to her) at the drop of a hat.

Angie: Is it hot smut wise? Like steamy, steamy? or just warm and toasty?

Jo: I thought it was sort of mid-range on steam, Angie? Trying to remember… It was also sweet in places. I liked it.

Jeanie: Eeeep! I loved this book!!! I think there’s more “action” versus steam but really good! And the heroine is FUN – NY!!! Can’t wait for part 2!!!

Amy: I just finished this , it was a Great Book loved Jay & Lily !! He was total alpha male ‘ heartless at times , sweet , hot and just delectable ……. major badass too . Lily was funny , innocent and pretty damn baddass herself !!! Must read

Alyssa: So glad you are reading/ reviewing this book!! Loved it and so happy you are spreading the word for this awesome author! One of my favorite reads of 2013!

Tiffany C: I’m reading this right now too and loving it!!

Tiffany S: I loved this Book!! I pushed all my Goodreads friends to read it too!

Rochelle: Thanks so much for the rec on this one. Read it today & really enjoyed Jay.

The first half really sucked me in. The whole tentative befriending the “unapproachable neighbor” with holiday treats (pumpkin pie is apparently his weakness), and I was already crushing HARD!!

“Most moms cross the street when they seem me coming, not send their daughters over with dessert.” Now he appears amused, a half smile forming on his face.

Wait… didn’t unapproachable bad-ass Clay from Kele Moon’s MMA series also succumb to a piece of pumpkin pie? LOL!!! Apparently book-men that crush on a book-girl’s pie makes me crush on him. 😉

Sidenote: right right… Clay hates pumpkin pie but he was so touched that she brought his angry-face a piece that his crush started there. Good ol’ pie works every time!! 😛

Alas, this review is about “Jay” and if you love true bad-ass, unapproachable, no-nonsense alphas, you will LOVE him. Even if he is a sort of… bad guy. A hired hit-man that has a vengeance streak a mile-wide. Even with all of his “jobs” he’s got one in particular that he’s been working on for years.

And sweet and innocent Lily just wants to be his friend, and as much as he tries to resist, her relentless pursuit of him finds him giving in.

I head home, determined to get strangely-frightening-yet-oddly-enticing-guy out of my head. For reasons I can’t explain, I want to know him better.

At first, to a few self-defense lessons (he saved her from an attack at a local bar), but he continues to “save” her as he holds each night when she sneaks into his house… and into his bed. Her nightmares are getting the best of her, and no matter how scary Jay looks and no matter how aggressive his demeanor (even HE insists she has reason to fear him and his world)…

His brows knit together and he doesn’t look pleased to see me, the exact opposite actually. He looks a little pissed.

“What?” Jay bites out in the gruff voice that I hate.

I stand there not speaking like a fool, feeling embarrassed for coming over. I should have known better. The feelings I had Wednesday morning were aftershocks of him rescuing me.

“Sorry, I didn’t mean to bother you,” the words stumble out. I don’t understand how I have moments with him where I’m undeniably drawn to him and others where he makes me want to cower away.

Yep. By the second (or was it the third?) bar-scene where he works as a bouncer, I was a big ol’ puddle of crush on him!

So that was the first half. FAN-FREAKIN-TASTIC!! Everything I love in a book and a potential couple.

Second half was great too, but lost me just a touch as I’m not so much into action, shoot ’em up stories. It sort of leads there ’cause no matter how much Jay wants to protect her from his world, his enemies have gotten wind of his new “weakness” and then, well… it’s on!

So I’m going to stop it there. Let’s just say it goes from scary-cozy and butterfly-inducing (with a ton of tension ’cause you just know the poop is gonna hit the fan, you just don’t know how…), to full on action. And still… in all of that action, there’s PLENTY of time for uber-jealous moments, angry “MINE” moments, and lots ‘o romance.

Any complaints from me? Not really other than a few times Jay’d use some words or say things that were more “poetic author-like” and not so bad-ass guy like, but I shrugged ’em off and continued to enjoy the rest of his awesome guy-ness. Oh and maybe a certain gun-scene that had me wondering about a certain character’s training (or potential superhero-ness ;)) but, again… *shrug*. Oh. And one of the villains (or the main one for this book), was a bit “villain-cartoon-cliché”… and then something… ew!! But you know what? It’s fun, easy, guilty-pleasure fiction, and I enjoyed it!

Does it end on a cliffhanger? Well… kinda. This story is fairly complete (at least as a “part 1”) but we’re going into the second half of the story and … anything could happen. And I will absolutely be reading it!

P.S. About the cover… Jay. What’s the third rule of gun-safety? Finger off the trigger until you are on target and ready to fire. Lily, you know what I’m talkin’ about… 😉 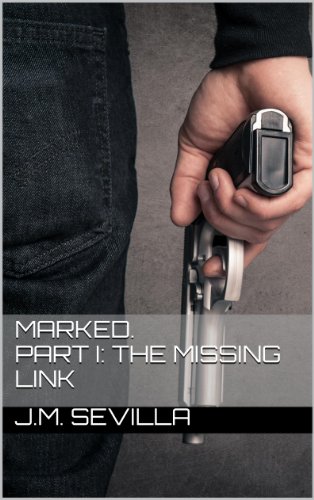 You had me at brooding. One Click Strikes again…

I liked this one. It was engaging, had a great build-up between Jay and Lily with a hot sexy connection, and had some exciting bang bang shoot em up adventure. And I do love those sweet and vulnerable moments. Anyone know when part 2 will be out?

Cliffhangers really tick me off. By the time the next installment comes out, I’ve read so many other books, I’ve forgotten what it was about. I know I enjoyed this, but I already can’t remember much about it. It’ll be time for reread when part 2 comes out.