Rock Hard (book#2 in the “Sinners On Tour” series).
Remember that jerk “Sed” I told you about in book#1 (you know… the singer)? Pretty much the hottest guy alive (*sigh* yes – alive. Still no vampires *shrug* 😉 ). Tall, hulking and sexy as anything. And. He has DIMPLES!!!! (my absolute downfall – dimples will win me over all the time). The guy who would use many groupies at a time, and throw ’em outta the bus when he was done? Well, maybe I take the “jerk” part back. Because… his heart. It was broken. Stupid Jessica!! Or so I thought.

But then this book let me in on exactly what happened between Jessica and him. Jessica was his fiancee when they were still a struggling band, and when she was accepted into law school, he forbade it. FORBADE IT!! Not because it was expensive (she had scholarships), but because she was supposed to want to follow him around, tending to his “needs” and eventually having his babies. That was what he expected of her.

“What did you expect? That I’d be happy as your little toy?”

And he expected that she should want that for herself. After all. She should consider herself lucky. She was Sed’s girl. Yup. Quite the ego on that one. He didn’t believe she had the balls to leave him. Until she walked out that door.

This was his last chance to make things right between them. All he had to do was admit he was wrong to try to control her life. Wrong to think of her as an object instead of a person. A person he supposedly loved enough to be his wife.

She waited. Wanting him. God, she always wanted him. As overbearing and arrogant as he was. she wanted him. She did not however, need him.

“I don’t think you will.” he chuckled. “You’re not strong enough to leave me.”

Jessica snatched her acceptance letter off the table and proved him wrong.

So he took it out on all of the self-deprecating groupies that kept throwing themselves at him. No emotion, no kissing, no love. Ever. He doesn’t even remember their names. There is only one that will ever live in his heart, and torment his very soul until he dies. He even still carries the engagement ring that Jessica threw back at him as she stormed off. Sed’s outlook on love doesn’t look very good, but when, two years later, he runs into a nude Jessica (stripping to pay for college), he yanks her off stage and doesn’t look back. He doesn’t care how he has to keep her (physical restraint sounds just fine to him).

He refused to release Jessica. Refused.

All he knows is that he will do ANYTHING to keep her from walking out of his life again (even if eventually, it meant truly changing himself to show her how much he loves her). Awww… Sed. You stole my heart a million times in this book. As mad as I was at you, at first… there were many extremely sigh-inducing, “real” feeling, moments.

But we mustn’t forget. Sed’s not always good with words, and Jessica can’t forget his last ones. And while this book starts off with a lot of I HATE YOU’s, we all know neither one have gotten over the other.

It’s been two years of emotional heartache, agony and lonliness, and here they are again, “stuck” on the same bus together. Oh. Right. I forgot to tell you. No worries, he didn’t actually physically restrain her (although he thought about it). Myrna ended up giving her a job as her assistant (for the groupie study she is still working on). How convenient right? LOL!

Why did Jessica feel like this woman was manipulating her and planning her demise? “We can’t get along.”

“This is a professional relationship, Jessica, not a personal one. Besides, you’ll be working for me. You can ignore Sed entirely.”

Jessica didn’t think it was humanly possible to ignore Sed. Sed was… Sed was… well, Sed.

How to keep from sleeping with the love of your life that, you hate with a passion, when in such close proximity? Ya can’t, people! It’s impossible. Sparks fly (angry and steamy ones), and I LOVED the book pretty much, as much, as the first one. ‘Cept for the last quarter of it.

Well…. it was good for 3/4 of the book, then… I mean. Hrmmm… I liked it all, but the last quarter was weird in terms of the writing flow. I actually scrolled back a few pages (a few times) to see if I missed something… The characters were suddenly changing their minds in this book way too quickly. WAY too quickly, and it was sort of choppy and weird because of that.You know how when something *might* happen, you get some insight as to that character’s thoughts? Well, she didn’t do that towards the end.

It’s true. I think the author knew what her character’s intentions were, and while we were privy to all of their thought processes as the story progressed, she forgot to let us into some important thoughts towards the end. Stuff happened and I was all…. WHAT? HOW? WHY? WHAT? Suddenly, it went a bit too quickly for me, and there were a few moments were I cringed at some of Jessica’s later very clingy actions. I was wondering where the strong independant and defiant Jessica went. For a moment, I thought she developed “groupie delirium”. And then…other stuff happened and I was all, What? How? Why? Just like that? Read it. You’ll see what I mean.

Oh the mind games. There are plenty of them in both books, but, that just goes with the territory 😉

But yes. I am addicted to that Rockstar rush. I LOVE these guys. And when I say all of ’em, I mean it. These books, while focusing on a main couple, lets us into the lives of the other members as well. Their interaction with each other, their own personal struggles, everything.

Trey. I can’t WAIT for your book. You are quite the complex character, and I’m anxious to indulge in your angst.

Let’s just say, there is a little of that whole “V & Butch” vibe going on in here (you Black Dagger Brotherhood fans will get where I’m going with this)…

Bring ’em on, Olivia Cunning! Your genre of guilty pleasures suit me perfectly! 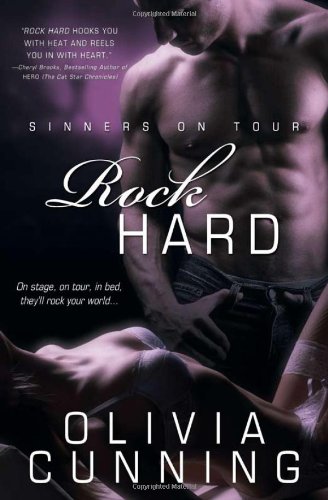 Great review. I just bought this for my wife. What’s V and butch. My wife won’t let me read her erotica….?