Starting Fires
I’m done!! Remember this one? LOL! 😛 How could you forget, since I first brought it up yesterday. It caught my eye a couple of days ago when the author dropped me a note to tell me it was a new release. No reviews, brand new author, no reader recommendations (yet), but there was just something about that blurb that had my attention, and so I chose it as my next.

Over 450 pages, and I just finished it today (fairly quickly considering the length) and it was well worth moving it to the top of my TBR list. I loved the writing style (it had me connecting from the start), and it focused on all that fun romance-angst and push-pull that I love so much.

I especially loved the “first person” POV and even more so because it was all her. I got to be the heroine throughout, fall in “crush”, fall in “love” and then deal with the inevitable heartbreak of falling for a well-known “player”. Or so she was told…

But you know how that goes… what if he’s been a player all this time because he just hasn’t found the one? Hrmm…? And therein lies the romantic-angst fun! Is she that one? Or is she one in many?

Marlowe (love that name, BTW!!) moves in with one of her best guy friends (and his roommate) in a brand new city, to start over (and recover from a previous heartbreak and emotionally abusive boyfriend).

Normally, I’m not the type of person to let someone belittle me like that, but we’d been together a long time and I’d come to rely heavily on him and his support. It felt like he was all I had – the only one who truly cared about me. After some soul searching and self-reflection, I’ve realized that I should have proudly told hi to “f**k off.” Nobody deserves to be treated like that. Ever.

Excited about her new beginning, she becomes especially excited when she notices their neighbors across the street. Particularly one.

Yikes. This guy had trouble written all over him. Trouble for me, anyway.

Lucas. The lead singer of her roommates’ band, the owner of a popular bar where they hang out, and a well known heartbreaker. Oh don’t get me wrong… he’s nice, responsible, and an all around good guy. Not a womanizer by any means (the girls go to him, and he just… accepts). LOL!

But he’s never been one to settle down, and Marlowe better resign herself to that fact, before she gets her heart broken again.

Charles sat up and turned towards me. “This isn’t a challenge, Marlowe. If you want to have fun, then go for it, but don’t expect anything more. He’s my friend. I don’t want it to get to the point where I have to choose between the two of you, and that’s what will happen. It will end badly. It always does.

Thing is… Lucas has his eye on her, and it doesn’t take long for the flirtation to develop into something else. Something frequent. But you know how that goes… once she starts expecting more (even though she’s doing her best NOT to), the bevy of girls surrounding her crush starts getting old indeed. 😉

He was free to be with whoever he wanted. And so was I. It sucked that right now the only person I wanted to be with was him when he apparently had others.

So what’d I think overall? Very good read, with a great progression in the romance-angst department.

What got me the most about it was the writing, though. Just something about it that played our so realistically, from her thought processes…

I’d been only his for so long, and all I wanted was for him to be only mine.

…to her interactions, to her daily life, and especially, her feelings (and reactions) towards Lucas. I LOVED being in her head.

From the moment I’d met him, I knew that Lucas was a risk, but one I thought I could handle. I’d been wrong. All of my careful planning, keeping my walls up, pulling away, giving in, it hadn’t done anything but solidify his hold on me. He’d stolen my heart. Taken it without me even knowing. It had been so skillful that I didn’t even realize it was gone. By the time I had, it was too late.

So good! Mind you, nothing “too different” (in fact we’ve read stories like this before), but there was just something about it, for me, that had me INTO it. Connected. Loving where I thought I was going to go.

And did I get there?

Well, sorta. Oh I liked it big time, don’t get me wrong. But this one wasn’t as angsty as I wanted. More on a lower-level of emotional pain (even though the angst-potential was constantly humming in the background). There is tension, and there are  “OH NO HE DIDN’T!!!!” moments for sure, but I think the angst could have been taken to the next level. The emotions, more deeply explored. Towards the last third of the book, I found it dragged some, almost as if we were being provided the heartache and pain scenarios, the almosts, and the bitter disappointments. The mistakes (on both parts) and the arguments, and even the tears. But I didn’t get to feel them as much as I wanted to, considering the exact focus of this story was exactly that. You know?

So that’s it… that’s my only issue with this book overall. It could have been even more intense. More exciting. More *gasp-worthy*. But the author did great. Lead us down a potential path of romance and all the “ouch!!” goes along with it, but she just went a little too easy on me. 😉

Still. VERY good, and if you’re in the mood for a “bad boy/new adult/adult” romance theme with plenty of romance angst, but not too “tear-your-heart-out” then I recommend it! 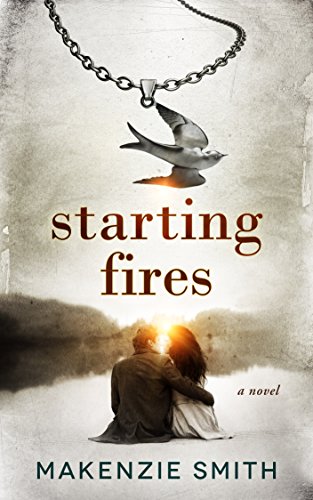 Maryse, your review sold me on this one! My first thought with this cover was of the Hunger Games; maybe the necklace? 🙂

The necklace has meaning… 😉

Let me know what you guys think of it. 😀

Thanks Maryse. It actually sounds perfect for me. I appreciate you uncovering another new author and work.

Sounds good! I just finished The Law of Moses. It was gripping – very moving – put it high up on your TBR list…

Loves this one! Almost had a Beautiful Disaster feel to it! Couldn’t put it down! Recommend for sure!

Really liked the sound of this one but can’t find it on amazon uk? Any idea if we will get it in the UK?

Hey Lee! It should be there. I’ve got the link for you,

Brilliant thanks, it’s weird I searched for the title and the author and nothing came up! But the link worked great

Yay! I’m so glad you guys are loving it, too. It’s just got the right feel, and the “voice”… Perfect for us.

Just started reading this and the prologue certainly gives you some insight into Lucas going into this story. Hmmm…

And it is KU too! Woohoo I just added it to the pile!