You are here: Home / My Book Reviews / Book Review – Stolen by Lucy Christopher

Stolen
Whoa. This is a tough one. Really tough. It’s tough to review, because I don’t want to give anything away. Tough, also because this, well… I guess it might not be for everyone. In fact, I glared at my husband a few times when he asked me how I was liking it. Not because I wasn’t liking it, but because I was a mess. Where was this going to go? Why were my feelings so jumbled. Would I be satisfied with the outcome? My reactions were all over the place.

But there’s a thing that’s easy for me, and that’s gauging how much I liked, or loved a book. My fundamental reaction to it. And this one. EASY. I reacted deeply. I LOVED it. In fact, there were a few sob-worthy moments. I won’t bother to tell you anything about them, but just to let you know, I was so overwrought at times, that I just stared. Lump in my throat, pain in my chest, tears threatening to spill. But I just stared.

And I know I loved it, because I can’t stop thinking about it. I can’t stop going over a ton of scenes now that I know where it “went”, and re-evaluating my initial reactions to those scenes. Reliving them, torturing myself over it. I know of a few people that like this “sort” of book and I’m just dying to tell them… “PLEASE!!! Read this NOW.” I need to let it all out, with someone who’s read it, because these pent up feelings are agonizing!!

Oh and thank you, husband, for setting up my “spoiler” forum. This is definitely a book for that!

You blinked quickly when I looked at you, and turned away as if you were nervous… as if you felt guilty for checking out some random girl in an airport. But I wasn’t random, was I? And it was a good act. I fell for it. It’s funny, but I always thought I could trust blue eyes. I thought they were safe somehow.

Wow. How does one write a book about a sixteen year old girl (by the way, this is from her POV), who is kidnapped by a handsome twenty-something year old male and taken to the Australian outback.

You trapped me easily, drew me toward you like I was already in the net.

“Wouldn’t you rather go to Australia?” you said?

I laughed a little; the way you’d said it sounded so serious.

Deserted. Just the two of them. Where does something like that, go? What can you touch upon? Can a reader become emotionally connected to it, other then the initial fear reaction? How does it end?

All I can say is, it did what it had to do. It went where it had to go. I don’t know if I’d change a thing. I don’t think I would. But another side of me… *sigh*

You patted your pockets, then pulled out a box of matches. You gestured towards the rocks.

“Because it’s magic, this place… beautiful. And you’re beautiful… beautifully separate. It all fits.”

You twisted the cigarette between your thumb and forefinger. Then you held it out to me. “Want one?”

I shook my head. None of this fit. And no one had ever called me beautiful before. “What do you want?” I asked, my voice cracking.

“That’s easy.” You smiled, the cigarette in your mouth hung down, stuck to your lips.

I tossed and turned all night over it. I’m exhausted, and I feel like I was thrown off of a runaway train. In fact I actual had a physical reaction to this one. My back is KILLING me. I was either so tense while I read it, or so tense while I tried to sleep it off that I’m now officially hobbling. More like waddling now. I’m standing straight again, but definitely waddling.

I read this in one sitting, and at 1am when I reluctantly reached the end (yes, I was not ready to be done), my sleeping husband awoke. I took advantage of it. I started to tell him about the book. Every detail. Every scene that had me perplexed. What I thought, when “this” happened. How terribly sad and lonely I felt, when “that” happened. I re-evaluated it from two different perspectives. I went over moments of how I felt as I was reading, and how I feel, now that I’m done. He humored me for a bit, going over “reviews” he read, describing all of the different sides and “arguments”.

I was right there with every one of them.

Him: “Yup… so many had that same reaction.”

Him: Yes but, you took it in from “that” perspective, so… *spoiler*

Me: Yah, and then.. in this one scene, now that I reflect back on it… I feel like *spoiler*

Him: I’m beginning to think I didn’t wake up on my own… did I?

At times the story dragged somewhat. So much detail, so much observation, anger. Experiencing it all through the heroine’s eyes. Moments of long seclusion, thoughts of escape, analyzing every little detail. But I knew it wouldn’t drag for long. And for a good part of the book I was absolutely unsettled. Not that a book with this kind of subject matter lends itself to ever being settled. I was disoriented, scared, and felt really bad, irritated, and frequently furious. Uncomfortable. I’ve written angry e-notes all over my e-book. Stuff like “The Australian sun baked his brain, I think.” to “ohhhhh I need relief. Never any relief!!”

And while I loved it, I know not everyone will. Not because the story isn’t well written, but because of the feelings it instills, and the progression, the development, where it all goes. Again, it’s not for everyone. In fact, normally, I think I might have avoided it. But I wouldn’t take back reading it for anything. It’s not my “norm”, but this is a book I will never forget, and if someone asked me for an “out there” crazy, deep, emotional, wreck of a story recommendation, I would excitedly recommend this.

They ran down your cheeks quietly, slipping over your jaw.

I’d never seen a man cry before. I’d never even seen Dad close to crying. Those tears looked so odd on you. It was like the strength of you just seemed to sap away. The surprise of it stopped me being so scared.

Keep in mind, this is dark and will mess with your head emotionally. Things aren’t always black and white. Lots of shades of grey in this, and it’s hard not to become invested. Sure, it’s missing some of what I normally look for in a book, but has a TON of everything else that absolutely consumed me. It was… different. Original. And how it was written… wow.

Update: I’ve received a few questions in regards to whether this was considered a “romance” novel.

My answer is this: This isn’t romance as much as it is just a heart wrenching dramatic story.

P.P.S: Here is the link to this book discussion in the “spoiler forum” <—— BEWARE!! DO NOT CLICK on it if you haven’t read the book. However once done, come back and discuss with us!! 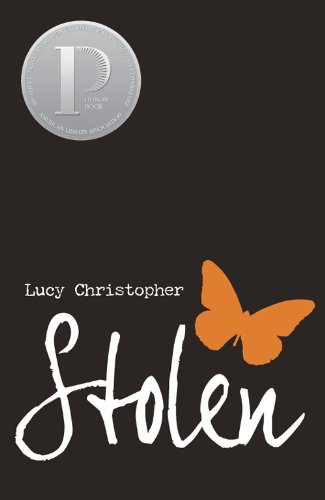 Hrmmm… Yes. I do believe so, Jackie.

Found you from Lucy Christopher’s facebook, she thought your review was great, and I agree! When I read the book I toiled with my emotions and was a mess through it all. And I felt Stockholm Syndrome after I was done!

I know Ash. We can’t stop analyzing our thought processes on the discussion forum. It was a really good read!

Kelli Maine (author of taken) mentioned this book as one of her favorites in one of her blogs….i got the sample (always sample first) and read the first page then came to your blog in search of a review and here it was! So i will be purchasing….im a little nervous and excited all at the same time!

I just finished…good book, well written but it dragged as you stated and that kept throwing me off…I stopped went to TMS and came back to this one. I was nervous with how it would end..but overall good read

I still cant get Ty out of my head….

I loved the book. when i finished reading tears ran down my cheeks.
I feel that your review is great. i can never forget Ty.

If i were gemma , i too would have done the same.

Did this book really have to end? I really liked this book as I read it, but the last 60 pages or so had me clutching my chest and gasping for air. Though I knew I shouldn’t, I wanted Gemma to want Ty from the start. As I read the final pages my heart ached for what I read and the emotions that the story brought about. I’ve heard rumblings of a second book and I can only hope those rumors are true because I would love to know what happens next…

I’ve been looking for something different to read — something a little edgy. I hope this is it. One-clicked. Thanks for the great recommendations, as always.