complaint would be that there was not enough face time with Zane (and even Noah for that matter). Oh, don’t get me wrong. There were a few *ahem* worthy scenes…

….but Jackie was pretty much on her own (well on her own, with her best friend Remy) for a large majority of the book.

The love triangle is still going strong. Since succubi do not need to sleep, Jackie and Zane spend their nights together, and Jackie and Noah are together during the day (talk about getting the best of both worlds….a cup that runneth over…having your cake and eating it too…) Woops! Sorry ’bout that…my mind started wandering again.

On to the situation at hand: Noah and Zane are struggling with jealousy as Jackie insists on keeping them both as her lovers. Noah makes the heartbreaking decision to leave her (at least in terms of their affair).

“I can’t do this, Jackie,” he said, shaking his golden head like an angry lion. “We are not going to keep playing these mind games. I’m not going to play along.”

So I wouldn’t be having sex with Noah unless there was some sort of commitment involved, like I won’t sleep with Zane ever again? I couldn’t keep that sort of vow.

Saddened by their break-up, Jackie notices that her sex drive is increasing at an alarming rate, and now, one man down, her “needs” are no longer being satiated. Remy (her best friend) informs her of a possible curse (where the sexual urges will increase to the point of starvation succubi-style. Eventually, no amount of sex will satisfy her). The last succubus this happened to, perished mid-orgy! Well…not the worse way to go….tee hee!

“Her curse made the Itch reappear every few hours. Then every hour. Then, even less time than that.”

Good lord. While I loved having sex with Noah and Zane regularly, the though of the Itch being only an hour away was frightening. Even ice cream sundaes would get old if I had to have them every hour, on the hour. “So what did Victoria do?”

Her only solution; to head out to New Orleans and meet with a Succubus/Voodoo Priestess and figure out how to have the curse reversed (of course, even this has a “catch”).

Needing to “feed” while on her trip, Jackie tricks Zane into going with her;

I pulled away, frowning up at him. “Noah broke up with me.”

He shrugged, his grin displaying gleaming white fangs. “I don’t care, as long as this means you and I are exclusive. No more seeking him out for sex, and I won’t have to go hunting in bars for blood-”

“Whoa, there.” I pulled away from him, my eyes wide. “I’m not going to be your one and only blood supply.” That would mean dooming myself to only half the day again, and if my schedule was going to match Zane’s, that mean no daylight, no regular shopping hours…and no Noah. Ever. The Serim slept through the nighttime.

His mouth tightened slightly. “You just fed me and things were fine. Don’t tell me we’re going back to this.”

I thought hard, trying to come up with something that would appease him and still give me my freedom. “How about a test run? We stay exclusive for the next few weeks, I let you drink from me, and we’ll see how this road trip works out. I really need you for this.”

And the hijinks begin! From outrageous porn-signing appearances, public demonic-style possessions, to being left mid-trip when Zane realizes Jackie is cursed (oh did I forget to mention? Her curse is the equivalent of a paranormal STD). There’s even an incredibly handsome stalker that seems to be following Jackie around. Is he protecting her? Or does he have sinister intentions? I’ll let you find out, cause this wild ride is fun, exciting, scary, heart wrenching and über-sexy!

I’m going to leave you with my favorite “lump-in-my-throat” moment (but I’m not giving away who she’s talking to):

He wiped my cheek with his thumb gently. “It’s never fair in love and war, Jackie.”

I laughed through my tears. “Is that what this is? Love and war?” 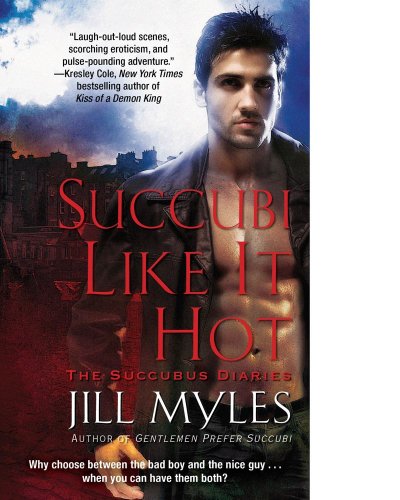