The Sleep Tight Motel (Dark Corners collection)
So much story in such a quick read. Yes it’s short but it gave me goosebumps and… kind of warmed my heart, too!

Weird right? But there was a good message here, in its own way.

Nicole: I’ve listened to a couple of the others so far in the collection and mostly enjoyed them. The Sleep Tight Motel was pretty good…

Maryse: YAY!! I’m going to start “Sleep Tight Motel” next!!!! That one has really good reviews. The cat-cover one with that creepy title looks good too.

There’s not much I can say since it’s a short story, and all of the real oomph is in the reveal, but I will say this is well worth the snuggle-up read when you have a bit too much time on your hands with nothing to do. Or even… not in the mood to do anything… much. Waiting rooms, a quick read before bed (yes I know this is “horror” but it’s not THAT scary)… maybe even enough time to read over lunch? 😉

The heroine is on the run, hiding from her abusive (once-seemingly “perfect”) boyfriend.

I think part of me knew the first night we were together that he would be the end of me. He was always the predator. I was always the prey. It’s pointless to try to reverse the roles. You can’t fool Mother Nature.

Gorgeous and rich… or is he a dangerous scheming psychopath?

I stuff the phone back in my pants. I should get rid of it, cut the last tether to the life I’ve just set on fire. I can’t bring myself to do it. Maybe there’s a way out of this. A way back. I know there isn’t, of course.

She’s found a remote hotel to stay at for only one night before she heads out again. She’s having car troubles, it’s late, and she needs to rest from looking over her shoulder.

…here I am, alone in an old beater on a dark highway with Halloween looming. Why do we celebrate the monsters, the destroyers, the killers among us? Me, I prefer to run away. As fast and as far as I can get.

And while the hotel manager appears to be kind and warmhearted (and intuitive!!) offering her the opportunity to stay as long as she needs,

Does he look a little disappointed? I feel that familiar niggle of not wanting to disappoint anyone, ever, for any reason. Another female quirk, isn’t it?

Always be polite, meet expectations, smile when you don’t want to, cry instead of getting angry. Be pleasing. But honestly, I have really walked off the edge in that department.

…she’s scared he’ll find her if she stays in one place too long. She can’t allow herself to relax, no matter how good it feels to stay.

“Come on back,” he says gently, opening the door. “Finish your breakfast. You’re safe here. You don’t have to run anymore.”

Hrmmm. We’re not so sure.

And worse yet? She MUST continue moving especially when she realizes the police are looking for them both. Is she a victim or an accomplice?

That’s how I felt! 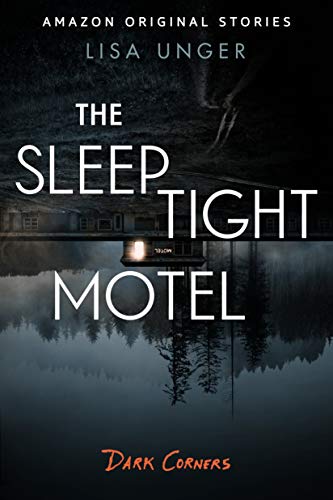 You had me at short story! The creepy is a bonus!! 🙂

Yes!!! I’m a new fan of short stories because of time constraints, it’s fun to get a whole story in anyway. And some of the super well-done ones (like this one) have a TON of impact anyway, ’cause they have to do so in such a short amount of time.
They leave us… haunted.