X
You are here: Home / My Book Reviews / Book Review – The Wright Brother by Marie Hall

The Wright Brother
I just had to give this new release a try when I realized it had a reclusive “deaf/colorblind” hero. I was already in love with the potential of that romantic angst, and so were so many in our reading crew!

Maryse: Oh wow, I bet this’ll be intense, so I’ve just got to “taste-test” this!!

MichelleS: …And the Wright Brother. OMG. I am such a sappy sucker for a guy who is deaf. Swoon. I don’t know why. Well, I do. But still… I can’t help it. That has to move up high on my TBR list.

Jean:  …jumping right to The Wright Brother! I can’t resist it!

Maryse: This is the one I’m reading right now and I think I just hot the “good” part.

I mean… it’s been good and all, but I’m feeling might anxious right now. and I LOVE THAT!… Sounds like it’s going to be sooooo wonderful!!!

Amy: First chapter in and Julian as a baby is already tugging at my heartstrings, the sweet little guy.

Nothing better for me, than to read about two people falling in love despite resistance (whether due to physical limitations, and/or emotional). To build a friendship overtime, that overcomes the fear of hurt.

“My world was bleak, silent and empty, until her. Until I met my neighbor, Elisa Jane Adrian.”

Oh yessssss, I wanted more of THAT! The idea of neighbors, so different and yet, eventually so connected. That builds into so much more. I LOVE that slow burn, and I love to explore the various angles of what makes someone reclusive. I was imagining all sorts of tentative interactions, learning sign language, friendly moments and that eventual romantic tension.

It ended up being significantly different than what I was imagining, from that blurb.

‘Cause you see, it spans a lifetime of their friendship. They’ve practically been raised together all of their lives as neighbors (and this book takes us through their interactions from children, high school and all the way to their college/adult years).

And while the blurb says she’s so much older than him… in reality, she’s only 2 (3?) years older. So of course, during their high school years, they are definitely mismatched as a potential couple (meaning tons of resistance from her since she’s 18 and he’s 15/16), but it doesn’t take too long for that angle to be dropped, as they move into a new phase of their lives and a new angsty angle comes into play to give them trouble.

But for me… while I can enjoy a book that spans a lifetime of an epic love, there was just so much “extra” thrown into this one to keep them in angst, but just never long enough for me to live it with them. Things would happen, (major events in their lives would be highlighted… quickly) be resolved, and then suddenly weeks, months, entire school sessions or even years would pass, to move us along to the next phase of their life. And this happened throughout the book.

In the end, I liked it well enough but was able to put it down, and even considered letting it go at about the 60-70% mark. Although once it hit that 70% mark, I enjoyed the angsty angle it took us on (I enjoyed that part the most, in fact). But again… it was a couple of years worth of “life” written into a small portion of the book. So while I could understand the dilemma the main characters were facing, and the angsty heartache their decisions caused them, I didn’t quite believe the final outcome. I didn’t so much… feel it. I don’t know that I agreed with certain character’s opinions on what “true love” is and how it should be recognized, and I was almost hoping for a different outcome altogether at that point.

A few minor quirks here and there and a rushed epilogue that moved us ahead again another few years, kept me from loving it. Like one of our fellow reader’s Michelle and Amy said,

Michelle: I am reading The Wright Brother too. Some of it is a bit weird (the palm signing and the implied color-blindness meaning he sees no color?)… makes me wonder if the author knows that deaf people do not sign into others’ palms and that color blind doesn’t mean no colors… besides that weird part, I like it so far…… It’s just kind of that “almost there” book for me. … And the skipping ahead weeks and months for no apparent reason. So much potential.

Amy: Finished The Wright Brother! I think a lot of the ladies on here would like it as the level of angst is about midway on thescale…well, *my* scale in which high is the level that us angst junkies go for. 😉  I wanted to smack Elisa at times and tell her to grow some lady balls and quit running away! *Literally* running away. And Julian…I wanted to be mad at him at one point but just couldn’t. He nestled himself into that soft spot in my heart. Yes, ladies, I do actually have a soft spot! Still not sure how I feel about those brothers of his though. 😕

Agreed, Michelle and Amy. I felt the same way. Those details did distract me every once in awhile, but I’m going to look that up and see if there are other “versions” of this that I just did not know about. And the brothers just didn’t feel real at all. Almost parodies or a cliché of what those kinds of popular “jocks” are like. And the skipping ahead. It felt as if we were provided just enough “important events” from their lives (their ENTIRE lives), just to move us swiftly to the “main” event part (which was essentially… the end). And by then, I just wasn’t as invested in “them”, as I wanted to be.

Still, an interesting love story, with a very sweet message that pleased some of our fellow readers!

Jean: I loved The Wright Brother… 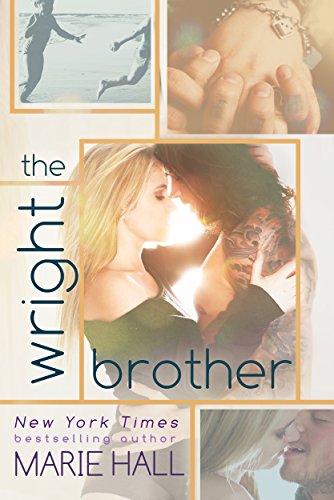 I wondered what you would think of this one. I totally agree with you…some of the things just irked me. The older part got me….especially as they got older. And as a person who took sign language 3 years in college…I couldn’t figure out the secret language of signing in the palm. Glad it wasn’t just me. But I did enjoy the book for the most part.

Yeah, Erin… it did have lots of feels and the angst towards the end got me pretty good… but there was just too much going on, I think… for me…

i agree with you Maryse . . . I am very busy but love a great book. I’ve found we have similar interests/likes when it comes to books. I treasure your recommendations and reviews. I started this quickly after you posted a blurb. Needless to say I went on to another book at about 30%. Stll in a wonderful bliss from “53 Letters to My Lover”

Those brothers of his still irk me. 😕 If how they treated him – not badly, but not real brotherly either – was going to be mentioned, I wish it would have actually been confronted and *some* kind of resolution found, even if it was just them being put in their place for it, ya know?

Yup. That about sums it up. You’re more of a trooper than I am… it was a DNF for me. I tried. I really tried. The palm-signing “color blind” skipping ahead thing just did me in! Lots of potential though. I think the fact that I LOVED the way Colleen Hoover wrote a deaf man made me WANT to read and love this….. so…. now I want a GOOD read about a deaf man…. I really like that cool plot twist in a romance story. If done well, it can be fabulous. He wasn’t deaf, but remember John in Black Dagger Brotherhood? The way he used ASL to sign to everyone? It. Was. Awesome. Loved him…..