X
You are here: Home / My Book Reviews / Book Review – Worth The Fight by Vi Keeland

Worth the Fight
Worth the fight… worth the read. And while it didn’t necessarily put me into a swooning, squee’ing frenzy I still enjoyed it. It’s well-written, with solid characters, and a story that progressed smoothly. Never becoming too far-fetched in it’s moments of drama.

It comes complete with all of our favorite fighter/alpha-male characteristics: he’s pretty much undefeated, gorgeous, and unattainable. We get that fun “bad boy” response to the potential love interest (intense desire now, but…potential “issues” as things get serious) which can’t help but culminate into moments of innate alpha-male claiming tendencies.

Elle and her “maybe-kind of” boyfriend of a few years, are both lawyers. There’s a solid foundation between the two, however she doesn’t (and hasn’t ever) truly felt a passion for him. Still, though, there’s a sense of comfort, familiarity and safety and so she sticks with it. But it’s when they work on a client’s contract together (that of famous MMA fighter Nico Hunter) that all of her coveted “safety” features fly out the window.

“Do you have a boyfriend?”

There is undeniable electricity between her and Nico (she’s never been so attracted to somebody before) and Nico feels the same.

His words are a whisper in my ear as he speaks. “I’d love to see you again. You let me know when the not really turns into a solid no.”

And like a true undefeated fighter, he goes after what he wants. And he gets it.

“Why did you pick me up on a motorcycle if you have an SUV in the garage?”

Nico looks down sheepishly and then I see the cocky lopsided smile that just melts me somehow. “I wanted to feel your arms wrapped around me tightly.”

Thing is, when things start getting serious, and as he is gearing up for his next big fight (after a devastating outcome from his last one), memories come back to torment him. Struggling with his past, his fears and his future, can he handle letting someone in so deeply? And can she?

Oh yes… the guilty conscience theme runs deep in this one.

We get plenty of the back and forth emotional attachment that he’s struggling with, because of a past mistake. One that hints at the fact that subconsciously, he feels unworthy of love or happiness. And yet his need and desire to be with her (his need for her at his fights, the way she brings him a sense of peace, and their incredible chemistry) keeps bringing him back full-force.

But here’s the thing. She too, has unresolved issues. And THIS is where the dramatic, very dark detail comes into play as she’s haunted by terrifying flashbacks from her childhood.

The dream is back. It’s not really a dream, it’s a nightmare. Although nightmares are a figment of a person’s imagination, so I guess what I woke up to wasn’t a  nightmare… it was reality. My reality. My memory. My past.

So… I could barely get through her memories (domestic violence against her mother), and this author did not hold back (so beware). Extremely detailed and vivid. Right down to the sounds. I was horrified and really felt like putting it down at this point.

And as we get to know her better, her memories expose her guilty complex and feelings of unworthiness.

That’s one of my “hiccups” with the story. A certain guilty conscience that I couldn’t connect to, considering the factual circumstances. A bit too much added drama that I think was over-amplified to keep the turmoil brewing between the main couple.

I mean, considering WHAT she had seen, had experienced in her young, impressionable age could anyone blame her? And… I think that fear alone (a sort of PTSD) could have added a more realistic effect on her relationship issues. Something to get over. You know… like trust issues. Maybe even especially because he’s a fighter. One that seems so protective of her, one who’s strength (and love) alone will keep her safe, and yet the fact that he uses his fists as his livelihood (fists that she has learned to fear from her childhood)… what a contradiction, right?

Okay y’all can come back now!! 😉 Back to the main review!

It still plays out well enough with moments of angst, sweet connection, personal growth, and then… regression again.

The thing for me is that, for some reason, as much as it was “up my alley”, I was able to put it down. Something about this story was so even-keeled and steady that while I perceived the moments of angst, I didn’t actually experience any of it deep enough for me to “be hooked”.

Sure, he was awesome. He was intense. He was everything I love in a hero. But for some reason, this is one of those books that I feel like I was reading from the outside looking in. And I can’t exactly pinpoint why. All I can say is other than her nightmarish “memories”, I didn’t feel much of their connection. It didn’t make me go all-out crazy.

And looking back over this recommendation, I now get what Bianca was telling me. And I totally agree!

Bianca: Worth the Fight- a passionate romantic enjoyable read. Very easy with very little angst. I call this type of story an ‘inbetweener read.’ Almost like a warm down after a work out!

But I’d still suggest this as a good “fighter” read for somebody that loves ’em alpha with those “MINE” moments, but doesn’t mind that this one is more “laid back” than our usual books.

“Are you seeing anyone?”

“No.” My response is assertive.

And I know a bunch of our fellow readers LOVED it just by looking at the reviews.

Linda: Just finished Worth the Fight. AMAZING. I need to start a journal just to keep up with all my fantasy boyfriends. Nico;)))))) MMA fighter and soooo yuuuummy. Loved all the characters in this read and that doesn’t happen often. Xoxo 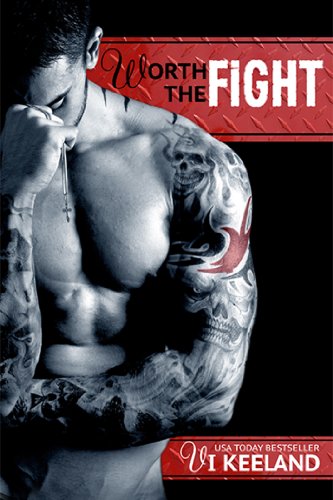 i just bought it today the cover looked yummy lol

Thanks for this review. Hm… I’ve been wondering about this book. It’s been doing really well on Amazon and I kept seeing it, but I just couldn’t make myself buy it yet (reading too much other stuff). Maybe I’ll check it out after all. Lately I’m looking for books without cliches. Cliche characters/predictable plots are starting to drive me crazy.

I loved this book, in fact I’ve read it twice. So good, you won’t be disappointed!!

My rating would be pretty similar to yours. I enjoyed it quite a lot, but the main reason was because of Nico. I thought Nico was a really good character – hot and sexy, good backstory, definitely a winner of a hero. But I actually thought the heroine was pretty bland. Except for her horrible childhood experience, there really wasn’t much personality there. No real reason why someone as totally awesome as Nico would be so ensnared by her. If the heroine had been much more nuanced, I think the whole book would have been that much better. Nonetheless, I did enjoy it.

I absolutely so loved this book. Read it once then read it again. I so didnt expect the whole story. Nico is sooooo Hot. A really nice romance story. I loved how he was captivated by her the first time he saw her and she thought he was so lovely. They also shared deep secrets that scaring to their personalities. 5 stars for me