X
You are here: Home / My Book Reviews / Miscellaneous / Lily’s Book Review – Why I Let My Hair Grow Out by Maryrose Wood

Why I Let My Hair Grow Out

Hey everyone! Go ahead and take off the jackets and snow shoes, I’m in charge today. It’s that time again. Ya know, when I take over the Maker’s blog, talk about books behind her back and cause some general mischief. If you are wondering where she is, well in mourning over the end of the Vampire Academy series by Richelle Mead and I have it on good authority she is being forced to holiday shop against her will. The horrors.

So you’re stuck with me. I broke out of my usual reading plethora and ventured into a little YA territory. Not that I don’t like YA, because I love Sarah Dessen and Richelle Mead. No, seriously, I have like all her books I think. SO anyways gearing up for my return to Ireland with the hardcore Mac and BARRONS (enter pathetic fan girl squeees!), I picked up “Why I Let My Hair Grow Out” by Maryrose Wood. To be honest I have had these since I started blogging about a year ago, but just never felt the umph to pick em up and read em.

I’m a little disappointed in myself for ignoring them. Seriously. I bought them because they sounded interesting and then sort of forgot about em. To bad. In the beginning there was Morgan, and she was a real bitch-a-rooney-dooney. Sixteen years old, with both her mother and her father and, of course, her little sister who she likes to think of as “Robot Girl”. The book kicks off with Morgan cutting her hair in the bathroom, and then dying it orange. She has just been dumped by her boyfriend, who said “it was time for a change”. I really hated that little jerk off too, cause he tried to make her into who he wanted her to be. Morgan knows this, but still tries to change to please him. This line was tragic and unfortunately all too true for a lot of young women:

From October to June, Raphael had been drawing a map of me, but everything was in the wrong place. That’s how it felt. Raphael patted my skinny ass and made remarks about my big booty. He found it amusing to introduce me as “Morgan, my girlfriend who has no sense of humor,” but my friends  (back when I used to have friends) always thought I was the funny one.
Raphael looked at my favorite New Yorker Cartoons and didn’t “get” them. He called me sweet when I was trying to sound mad. He met my family and found them “perfectly nice” and “too sentimental”, when it was obvious both my parents were control freaks and my little sister was a battery operated robot girl who’d been programmed by Disney. If Raphael described me to you, you would never know it was me. If you took his map of me and tried to find your way from my nose to my chin, you’d get lost before you got past the nostril.”

Oy, see why I am hating on him? And ALL through the book she thinks back when he said something that made her feel bad, or like she wasn’t good enough. Oh, I wanted to punch him in the mouth. But in the book he is the PAST and Ireland is the future. Yup, after cutting her hair off and dying it orange and being horrible to her family, her parents have had ENOUGH. They think she needs a vacation and they need one from her, so they send her to Ireland for a week long bike tour. Yeah, half way across the world is one hell of a time out.

She is determined to have a miserable time, and her new look is not helping with airport security. She handles all of this with some spitfire snark and what I can only think of as the “teenage” attitude. You remember that, when you knew EVERYTHING and every adult was just a moron who needed to get out of your face? Yeah, she does that. That part tended to grate on my nerves, however she did end up redeeming herself later.

Once in Ireland she gets to meet Colin, and decides this twenty year old with bright blue eyes and a great sense of humor is just the perfect rebound, but her own childish pouting bites her in the ass with him:

“’Twasn’t your idea to come to Ireland was it?” he said. A real brainiac, that Colin. Maybe he should be a “leader of tomorrow” like Raph.
“Nope.”
“Well.” He leaned in through the window and lowered his voice. “Doesn’t matter. You’re here now. Don’t act the bitch, all right Mor? Doesn’t suit you really.”

He doesn’t stay angry with her long, because in a little hissy fit she intentionally goes the wrong way, and leaves her helmut behind. Bigger plans are in store for her though, because before she knows it WACK! She hits her head and off she goes to coma land.

But coma land is fun. Her hair is back to it’s normal color and very, very long. She wears long flowing dresses that look like they came of the Disney princess collection. There is alcohol drinking and a hunk named Fergus, and a talking horse, and cute sweet young girl named Erin. The bad part is everyone acts like they know her.
They say she is from the prophesy.
They say she is going to save them.
They say she is going to brake all the curses on them when she marries a fat farting alcoholic king.
Yeah, she didn’t take that part to well. Fortunatly for her, she wakes up, but every time she falls asleep it’s back to long-ago.

There were some pretty cute moments with Fergus:

“Right before this I was at Durty Nellie’s.” I was chewing my nails, but then I stopped because it didn’t seem like something the long-haired Morganne version of me would do. “We were watching Rugby on the television and I’d had too much to drink.”
“The last part I understand,” he said, nodding. “Too much mead can weaken the arm of the finest swordsman.”
“I guess,” I said. “Before that I was in Connecticut. It’s – very far from here. Across the ocean.”
Fergus looked at me like I started to smell bad. “You’ve come from England, then?” His hand went to the hilt of his sword.
“No, I mean across the OCEAN,” I said quickly. “It’s in the other direction.”
His sword hand relaxed. “You mean the great water! But that’s the end of the world!”
I shook my head. “Actually there’s a continent on the other side. Nobody here knows about it yet, except for some Vikings, I think. Or wait – maybe the viking thing hasn’t happened yet. Sorry, I’m just not a hundred percent sure when we are, right now.” This was the first time in my whole life I’d needed any knowledge of geography or history outside of a test. Clearly my grasp of both subjects was pathetic.

The fun and games come to a quick close when a riddle has to be solved, and better yet life is still happening in real time in her regular life. Events are fast and losing time like she does (and not being able to remember whatever version of herself was doing, while she was on the other side) she handled well, and mid way through the book she starts to make some real emotional progress.

Ok, so, I gotta go back to the Realm, I don’t want to be here to help unload boxes and packages. She may be my Maker, but it’s hard to command me when she can’t find me. Have a great day and don’t forget to put your mittens on, it’s freakishly cold here in the States.

Make sure to check out Lily’s own awesome blog – “Lilium’s Realm“ – she’s hilarious and my mom (Lily’s “Grandmaker”) is addicted to Lily’s darkly humorous side, as am I! 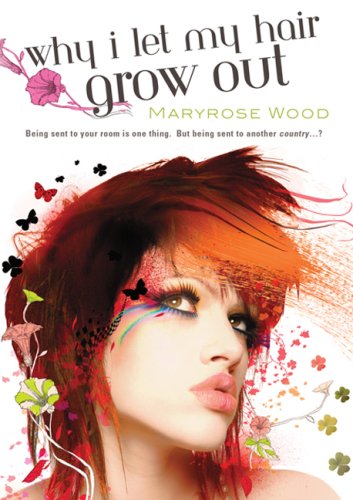