The Immortal Hunter: A Rogue Hunter Novel (Argeneau Vampires)
The latest installment in the series is an almost seamless continuation of The Rogue Hunter. We continue to follow the council enforcers on their latest investigation, however the focus is on Decker Argeneau (the son of Martine, and nephew of Marguerite).

Since Mortimer is caught up with Sam, their two week old relationship (and is somewhat useless for rogue hunting), the couple are left to take care of the new headquarters house, and Decker and Bricker are sent to capture Nicholas Argeneau (Decker’s rogue cousin, who is the brother of Thomas).

During their attempted take down of Nicholas, he exclaims that two mortal women have been kidnapped by a group of rogues and he is hunting them down himself. The enforcers hear the women screaming, and all three men head after them.

A battle ensues, four rogues are taken down, two escape (with one of the girls), and Danielle McGill is taken into protection by Decker and Bricker while Nicholas goes in pursuit of the other kidnapped girl (Danielle’s teenage sister). While protecting Danielle, Decker soon realizes that he cannot read her.

Danielle suspects that Bricker and Decker are hiding something, and whatever they work for, it could not be a law enforcement agency that Decker originally hinted at. She begins to suspect that they might be bad guys of a different sort, and after eavesdropping on a conversation between the two men, also begins to suspect they are crazy.

When the crew meet up with Lucian to hand over the rogue bodies, Lucian reads Decker, and says:

“CSIS?” Lucian asked with disbelief, bringing curious glances from everyone but Justin. Decker squirmed inwardly as his uncle continued to sift through his thoughts, and then Lucian shook his head with disgust. “And you haven’t explained to her about us? First Mortimer, and now you…Am I the only one who made it through this life mate business with my brains still intact?”

From what Decker had heard, Lucian has been a bit befuddled too, but he kept that thought to himself and merely said, “I was waiting for the right moment.”

Danielle suddenly finds herself in front of Lucian, confused as to how she got there…

“Your mind isn’t fault and you’re not losing time,” Lucian said, apparently reading that concern in her mind. “The reason you don’t remember walking over here is because I took control of your mind to bring you here…And I can do that because I’m an immortal…or as you people seem to insist on calling us, a vampire,” he said with disdain. “Everyone standing here is one…including Decker, who is the only one here who can’t read or control your thoughts. That makes you a possible life mate for him, but you’ll be the one to decide.”

In Dani’s panic over what she has just learned, a cute moment occurs that is a  good example of how human these immortals really are:

“Vampires aren’t supposed to be real. And how come you had to be a cute vampire? You should be a dog. All evil, vile people should look as ugly as they are inside.”

“We aren’t ev-” Decker halted in his denial, and then lifted his lips in a very rare-and in her opinion, totally inappropriate-grin as he asked, “You think I’m cute?”

While this novel follows the usual theme;

“Don’t run from me, Dani” he whispered, his expression intense. “I’ll just give chase.”

“I’m not running,” she whispered, her eyes on his mouth.

“Yes,” he growled. “You are.” And then he did exactly what she wanted and kissed her.

and love (many touching moments, my favorite being a very sweet scene, where Dani “hides”, chagrined, in the closet from Decker)…

“In here.” Decker tapped his chest when she remained lost in her thoughts. “What do you know about me in here? Do you trust me?”

we are led on a thrill-ride of action packed danger (many times over).

While my only real complaint was Danielle’s ability to become physically involved with Decker, while in pursuit of her kidnapped sister (realistically, I believe she would have been too distraught for anything to happen so quickly), this is explained away as an uncontrollable compulsion due to the nanos, and the life mate attraction. Since this IS a tale of romance, I shrugged off my concerns, and went with it.

Both Danielle and Decker come to acknowledge that differences amongst people are not necessarily a bad thing, and their road to self discovery is heart warming. While there are so many different things that happen in this novel (tons I would love to quote here), to say anymore would be to give it away, so I will let you enjoy this one, yourselves, while we all patiently await the September release of The Renegade Hunter: A Rogue Hunter Novel. 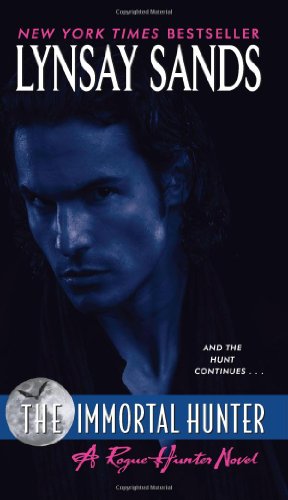