Zoey’s soul has shattered ’cause Kalona broke her heart, (but not in the way I expected). She is now in Nyx’s realm, as a damaged and fading spirit. Zoey’s body is slowly dying on earth, while her essence in the “Otherworld” is being a total basket case. The pieces that make up, well… “her“, are scattered everywhere and she can’t get a  hold of herself long enough to gather them back.

“If you don’t put yourself back together, you won’t ever leave here because your gonna die, Zoe. I can feel that.”

I looked into his warm, familiar eyes. “Would that be so bad? I mean, this place seems a lot better than the mess that’s waiting for me back in the real world.”

Down on earth the “super-best-friends” are working hard to send someone to Nyx’s realm to help bring her back. Her warrior, Stark, is the best choice, but similar attempts have been the sure fire way to kill past warriors & priestesses caught in the same conundrum.

‘Cept there’s a way. I can’t remember exactly how they figured it out (lots of library studying) but somehow *boom* they had the answer that centuries of Warriors and High Priestesses died trying to find out 😕 These kids are gifted in way more then just the elements, it appears.

Okay, so while all that is going on – and it’s LOTS (sending Stark to an ancient Queen’s castle that has been warded against ALL intruders unless personally invited by her, then getting his soul into Nyx’s realm “The Otherworld”, plus learning all these prophetic poems so that he knows what to do once he’s there etc… etc…) Stevie Rae’s story was capturing me fully.

They stared at one another, both struggling to make sense of this thing between them that drew them together even as hurt and pain and anger swirled around them, defining and separating their worlds.

Stevie’s situation had me perplexed and quite curious. I was all… “Zoey who?” It’s a strange thing when the main character takes a backseat, but in this book, the focus shifted in a good way.

Stevie Rae is coping with her imprint to Rephaim, Kalona’s evil Raven Mocker son, and we are realizing that, despite his insistence that he is a monster, he is more a product of his environment, than evil.

“Don’t make me into something I’m not. I have spent centuries in darkness. I lived with evil as my bedfellow. I am tied to my father. He is filled with an anger that might very well urn up this world, and if he returns, I am destined to be at his side. See me as I am, Stevie Rae. I am a nightmare creature given life through anger and rape. I walk among the living, but I’m ever separate, ever different.”

Raised to be a terror, his whole demeanor changes when for once, somebody sees him, cares for him, and changes him for life. He proves himself to her over and over again bonding them more deeply.

Yet as he stared into Stevie Rae’s soft blue eyes, what he saw was a whole new world – a world in which this strange little red vampyre meant heart and soul and truth.

It was those words – those selfless, heartfelt, truthful words that made Rephaim’s decision for him.

“I said she belongs to me. You scent her on me; you know it’s true. So I can pay her debt for her,” Rephaim said.

And while everyone in Stevie Rae’s life would freak to find out what she’s up to (and just how close she’s getting to the “enemy”), Stevie and Rephaim make no apologies for their connection. Well not for now, at least, as they keep their friendship hidden.

Oh right!! Kalona’s in deep himself. Neferet proves herself to be the most evil of all, and quite the master manipulator. But while she used to manipulate with her seductive beauty, she’s now manipulating with threats over souls. Cause she can. Watch your back Kalona!

“Neferet seduces my father and pretends to be his mate, but the only thing she really cares for is herself. Where he is filled with anger, she is filled with hatred. Hatred is a more dangerous ally.”

She’s darker then you. Hell hath no fury like a woman scorned, and all that… 😈

“If you, Kalona, Fallen Warrior of Nyx, break this oath and fail in my sworn quest to destroy Zoey Redbird, fledgling High Priestess of Nyx, I shall hold dominion over your spirit for as long as you are an immortal.”

All in all, it’s a moving story, and one that I was somewhat able to connect to. Although on occasion, I found Stevie Rae somewhat arrogant. Mind you, she does have a lot on her plate, but I found her insistence on reminding everyone about her title (High Priestess, First Red Vampyre, leader of all the red fledglings etc etc…) a little much, in the last two books. I mean, she’s what? Sixteen? After book four, my addiction to the series unfortunately crashed, but this book was a step in the right direction. My interest was piqued once again.

See…. I promised I wouldn’t mention Erik in this one. Woops! Did I just break my promise? 😯 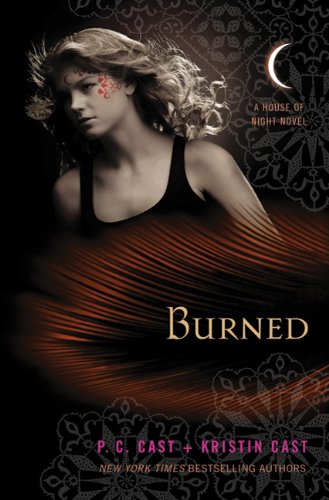 I am not sure about this seires…..Ya has been hit and miss for me. I loved Vampire academy and the city of bones series but hated the evermore series, I like the hush, hush series but hated the fallen series. Where do you think this series falls among the Ya books out there? I think I prefer more adult books. Thanks for recomending the Black Dagger Brotherhood series….I love it and would never have stumbled upon it on my own!

I’m with you about Black Dagger Brotherhood. Now that is a series you can’t stop reading.

Regarding YA: I LOVED Vampire Academy, Twilight, and when I first started reading this genre, Vampire Diaries. I haven’t read much YA to compare to, however I’d give the House of Night series 3 out of 5 stars as a whole. The reason. Book 2, 3 and 4 (and part of book 5) hooked me like no other (4 out of 5 stars for those books). Book 1 was an okay intro, but halfway through book 5 and onwards, the rest was just “meh” for me.

I read book #1 of Evermore, and that was okay for me too. Good parts for sure, but I didn’t have a huge desire to continue the series. I will eventually, I’m sure.

If you liked the Black Dagger Brotherhood series, you may be interested in the Midnight Breed series by Lara Adrian.