Beyond Shame
<—- Last Saturday, I read a book. This one. *blink blink* whoooooooooooooo that was steamy.

This however… oh yes. It is what it is. And it’s so very fun! But… come to think of it, I think I should come up with a better “catch phrase” to describe this one. I dunno that I want my mommy reading this. I don’t know that I want my mommy knowing I read this. Tee hee!!!

Yep, I blushed through the whole book. During one of the opening *ahem* scenes (in a tattoo parlor)… I was intrigued but somewhat uncomfortable. I felt a little… eeeeeeeeep!!! I squinched my nose a bit at some of the… stuff… the guys said. I think that’s when I noted “D-I-R-T-Y”. 😉 I started glancing around. Tugging on my t-shirt. My eyes bugging wide. Not like I haven’t read *that* kind of thing before (and to that intensity), but I’ll admit I was a bit slow to warm up at first. Or so I thought (but the tugging at the neck of my t-shirt would seem to indicate otherwise). I know, right?? With that kind of hot, who needs to warm up?!

And  I dunno if maybe I just got used to the idea, or the “scenes” got that much better, but by the end, I ummmm. Yes. I warmed up to it.  *blush*

Maryse’s Book Blog: Haha!! I know! I read it a week or so ago and my first note in the book was “woooooo this is D-I-R-T-Y”. LOL. I’ll review it today. Good stuff!

Takisha: … I seen this post…read the synopsis…read the sample…and I was sold! 31% in…and my oh my..thanks for the suggestion!!! … this Beyond Shame…this dirty lil book is giving me what I need

In our future world after a solar explosion, society has rebuilt itself in a few different ways. There is the, sort of “religious society”. Wealthy, upper class, but that live by strict rules. Extreme government control. All the comforts of living, and peace, but so very restricted. No drinking, no fornication… you get the idea. They can’t even have children without government permission first, and this is fixed right off the bat with a special form of birth control.

Then there are the gangs on the outskirts that have no government laws, or regulations. The laws are imposed by the gang leaders and rival gangs each protect their territories.

And that is where sweet innocent Noelle comes in. Wild child at heart, she is sick of her suffocating and stodgy upbringing, and keeps getting into “trouble” (drinking, and caught with a boy). She is exiled and let loose into gang territory. And literally falls into the arms one of that gang’s right hand man.

Tattoos – on his wrists and arms, the kind they taught about in school and whispered about at church socials. The sector gangs, the rough criminals who controlled the slums and waged war on virtue and life.

She’d been cast into Hell, and he was a demon.

I will say, as hot as this book was, the story as a whole comes together well and eventually takes over. Sure, the steam is a large focus throughout, but slows down somewhat and allows the characters to “live”, learn and grow.

“It’s whatever you make of it, honey. Whatever you want, it’s all up to you.”

What a terrifying thought. “The last time things were up to me, I got arrested.”

“Then I guess it’s all looking up from here, huh?”

“I hadn’t thought of it that way.” But maybe it was time she started.

I liked it. And when I caught myself thinking about it hours later, and wishing book #2 was out so I could get back into “their” world, I realized… I really liked it. 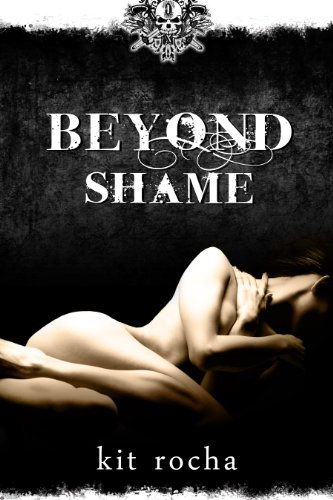 Yes, this one was good. Another book with a similar feel is Flesh by Kylie Scott. I read it after Beyond Shame. It is a post-apocalyptic erotica book, very good and is only 99 cents!

I am 60% in..chapter fourteen and I am enjoying it…i am in search of a HEA

Okay, another book to add to my TBR list… but I’m not saying ANYTHING on FB about it…don’t want my mommy making any more innocent comments under any of your posts LOL!!!

But I’m sure deep down you didn’t enjoy it… Right? Hm… Right Sweetpea? You read this book just to see what all the fuss was about… Right?…. I thought so! Ok…. But just between you and I, while no one is watching… You do remember that my birthday is coming soon… And you know how much I like to read… So maybe I should read that book, just to make sure that it has not tainted your purity… Just for study purposes… Obviously! ;-)))

Okay, I just HAD to get it after a review like that! 😉

Omg! I’m half way through, and it’s an anarchical post apocalyptic slutfest. I love it. Thanks for another great reccomendation.

I loved it! Definitely a slutfest, but I thoroughly enjoyed it. Thanks again for the recommendation, Maryse! 🙂

Wow. Just finished this today after your recommendation. Lindsey and Maggie said it all as “slutfest” is the only word to describe it!!! LOL. I need something sweet and easy after that one! *Whew* I may be sweating for DAYS.

Wow, you were so right. HOT and intense. Can’t wait for book 2.

So glad you posted this when you did! I was on the lookout for a new series….my love for BDB is gone 🙁 I just bought Lover Avenged but I think it will be my last. So tired of the many POVs especially in Phury’s book. Anyway, where was i? I’m at 36 percent of Beyond Shame and so in love with this series already!!!

I just finished this book and wow! I’m speechless. I mean, yeah that was pretty hot. Lol. It definitely had me blushing. Another great read. Thanks Maryse! Can’t wait for book 2 to come out! 😉

Me too, Anne. It actually got into the romance part pretty nicely in the second half. I was happy!

I’m really enjoying these super steamy reads. I think maybe I’m getting a little too desensitized because I’m not even blushing while reading them anymore. (I’d like to insert a blushing emoticon here about not blushing!) I have to watch out when I see your FB posts, Maryse, because I want to chat all about the books there with you guys but don’t really want family & friends seeing what I’m reading either.

The really interesting thing to me is that if I saw a TV show or movie that went as far as these books do, I’d turn them right off (and would probably be disgusted) but I love reading them. Go figure!

I think I just found my next read. Maryse, what book were you referring to here, which I’m sure is done by now 😉

Does anyone know when the 2nd book comes out ?