Hot Night
So THIS is the one I hinted about on Facebook (recommended to me by a fellow reader with that very exciting email subject that had me jumping with glee):

Maryse: I decked the halls!! Now time for some eggnog! And a bad-boy book. P.S. I think I have one. Oh yes. It was vehemently recommended to me saying “I’ve found another Travis!! Yes Really!!!” – so you know me 😉 I gotta check out the goods. More to follow…

Jennifer: im reading backstage now and have rock hard Forgot author but it was on your what to read after beautiful disaster list…all look forward to hearing about this one.

Maryse: Waaaiiiiit! Waiiiit! *stands on tiptoes and holds book high above her head* I will. I will. I gotta start it first to see if it gives me that *feeling*. You know. 😉

Well… my verdict is:

1.) the book was a fun overall good read and interesting enough to keep me reading almost straight through

2.) while “Zan” (the hero) had lots of “Travis-like” potential, for some reason I never got obsessed. I never got that *feeling*.

He IS pure alpha, and there were a few moments of deep heart-tugging. Even some broken-hearted moments. But the book had too much going on that I didn’t feel I got to really indulge in the hero. The reader didn’t really get to bask long enough, in their new found bliss. And we never really got to wallow in their heartache. I felt for them, but never felt it as if I was them.

They had some really good emotional moments. Steamy, sweet and a bit angsty (she wanted clean cut, since bad-boys tended to ruin her life in the past, and of course, he was pure bad-boy so they had a few arguments over all that).

“You surprise me. I wouldn’t have taken you for a judgmental, materialsistic b*tch. You look so warm and real.”

Ouch. She flinched back. “You’d better go,” she whispered.

He had that whole your mine, domineering-chest beating thing going on. Long haired and a  bit scruffy, leather, motorcycles, tattoos, even a shady secret past that tormented his present. And what makes a bad-boy hero even better? That despite his anti-social behavior, his devil may care attitude, deep down he has a pure heart of gold and overall good intentions (that somehow keep getting misconstrued). This hero had all of that. AND!! His name started with a Z!

Zan was amazingly everything I wanted in a book hero, and yet, I’ll probably forget him in a day or so. It’s true. *shrug*

But despite that, if you’re in the mood for a blossoming relationship, that the hero totally wants, but the heroine is totally resisting (oh by the way, her name is Abby!! LOL!!!! Yep, and she has some Abby-like qualities too – bad past with bad boys = insistence on NO MORE bad boys in her future), then this is for you.

Her weakness for tattooed, leather-clad bad-boy wolf types had gotten her into no end of trouble.

If you’re in the mood for an evil villain lurking in the background, with some elaborate “set-ups” in the works, a murder or two (or more), and his eye also now on Abby, then you’re in for a semi-exciting read. I say semi only because while I was IN the book, I enjoyed it well enough, but again this is probably one that I won’t be thinking about for long.

One of my favorite moments that had me giggling was this part (quick summary: she had absentmindedly doodled his name all over her calendar  at work with hearts). One day… has to come to her office for something…

He looked down, focused on the desk. He froze, eyes widening.

Abby covered her hot face with her hands. Seconds ticked by.

“Wow,” he said. “This is an… ah, interesting development.”

She lifted her shoulders in a mute, helpless shrug.

Tee hee!!! That’s when he pretty much clued in that her resistance (to him) was probably futile. 😉

So what’s it about? Abby works for a museum, has a great single and independent life, one best girlfriend and a fun colleague that keeps setting her up on bad blind-dates with guys that have all of the qualities on her “List” (pretty much any guy that doesn’t display any bad-boy tendencies). After one of her dates, she realized she is locked out of her house, and as she’s calling a locksmith (Zan), she also realizes she’s being accosted by her latest bad date, and Zan overhears it.

Zan comes to her rescue, and the fun starts. Now I’ve gotta warn you. I was a bit spoiled with all of the books I’ve been reading lately, (considering all of Kristen Ashley’s crude-ish yet awesome Alpha heroes). The hard way they speak, no-nonsense, gruff, shocking and appalling and yet so tantalizing. So I was a bit underwhelmed by Zan’s intro. He came off as a bit too “flowery” in his come-ons for my taste. I winced. Hot, towering leather bound bad boy with neck tattoos, and he’s talking wayyyyy too sweet for me to believe he’s real. But soon enough, he drops the act and to my delight, Zan, the alpha-male comes out to play.

“Just play with me, Abby. Toss me away when you’re done. I’m very tough. I won’t get my feelings hurt.”

Okay so anyway, back to the book. The museum she works for is getting in a huge lot of pirate treasure and a psycho, rich genius has his eye on it. Not for the wealth, but for the thrill of the “theft” and all the planning that it will entail. He barely feels emotion, and the only way he can feel is by doing some crazy bad stuff. And so, to me,there’s a bit too much of his evil-genius in there for me to have enjoyed the book fully. I love when there are monkey wrenches in a book (makes it exciting) but the romance in this book wasn’t fully explored because there was a lot of everything else (bad) going on.

So I’ll leave it at that. If you’re wondering why I didn’t go into frenzied *squee* mode on Facebook once I mentioned I was going to start something that *might* be what we wanted… well there you have it. That’s why. When a book is squee-worthy, I usually *squee* before I finish it, cause I just can’t contain myself.

This one was good. Maybe even really good. Just not squee-worthy.

But please… keep the recommendations coming, because Zan was plenty of fun while it lasted. 😉 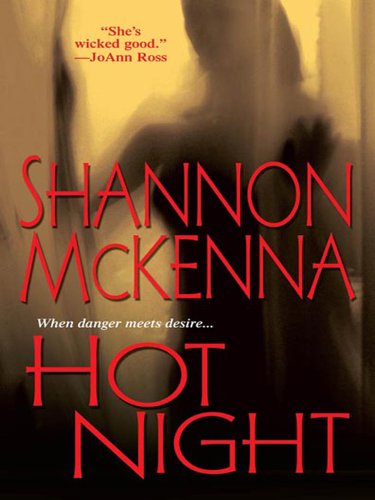 I’m reading Eternal Hunter by Cynthia Eden and I’m sooooo enjoying it! I’ve been reading it for THREE days (damn work) I just have not had time to finish it but as soon as I get home I dash to read it and just ignore my hungry kids 😉

Reading during the week is complicated, I agree. Responsibilities keep getting in the way of my books! LOL!

Eternal Hunter… I will look into that one. 🙂

Awww, sorry it didn’t quite get you Maryse. I think you’ve been spoiled by reading all the Kristen Ashley’s, LOL. I also loved the flashes of humour in Hot Night.

*hug* awww it’s okay 🙂 Please keep the suggestions coming, though!! I liked it tons, but just maybe.. I dunno. Maybe it was a bit rushed, and you’re right. I’m getting used to all of these longer-length books with lots of details and downtime, that my brain gets fooled into becoming a part of it for awhile.

Zan had SO much potential on that… he started reminding me of Kristen Ashley’s guys, but I just didn’t get enough of it (or him) I suppose.

I’m Reading the Colorado Mountain Series at the moment, I’m on The Gamble 🙂

Golden Trail………slow but crapola Maryse the big “revel” is coming I feel it in my bones…my heart is tingling……crap people get the read on I am drowning by myself….and it is not fun……………

And this book is good for that. Nothing too intense, but fun anyway.