Seducing Cinderella: A Fighting for Love Novel (Entangled Brazen)
A quick, sweet, funny, easy & wonderfully priced read. And!! It features an MMA champion UFC fighter. Fictional, of course 😉 hehe. But still, wonderful to imagine, and so fun to experience his delicious alpha-male reactions. A touch of bad-boy arrogance, cocky attitude, and jealous possessiveness that had even him surprised!

And what I loved most? Well, the developing connection of course, but… the dialogue pleased me, especially what he said, and the way he said it. I believed his growly ways and his ticking jaw. Only once or twice did I roll my eyes a bit, but overall, a great short “in-between” read. Enticing enough that you finish it in one sitting, but not so tormenting or angsty that you can’t move on to another read right after.

I described it to my fellow Facebook friends this way:

“I just read a good one too, that overall is great, but more on the “safe” side then the angsty side. Still sometimes those help cleanse our reading palette between crazy reads.”

And it might have been even better had it been a full length book. One where we actually got to experience the angst (’cause it’s there just not drawn out in the kind of detail that fools us into actually becoming “one” with the drama). Had we experienced his fights in detail, the “big event” and all of the feelings that went with that time period (and more) I might have connected on a deeper level, but again, for a short, plenty good!

So what’s it about? Easy!

Physical Trainer “Lucie” has a long-standing crush on a gorgeous successful doctor. He however, does not notice her as anything more then friends.

They’d always been intellectually compatible, and their mutual obsession to help patients recover quicker and better bonded them as nothing else could. She’d loved him for years, but he’d never asked her out. Never made a move, instead preferring to date classy businesswomen…

In fact, she just found out that he’d like to date one of hers!

Reid, a famous MMA fighter shows up for his appointment (bad injury to his shoulder), and catches her crying.

“Quid pro quo, Lu. You tell me who made you cry and why, and I promise to not find out on my own, hunt him down, and kick his teeth down his throat for putting that look on your face.”

Aw. I hearted him already. Oh stop! I knooowwww. Violence is never the answer. But hey! You’re talking to a girl who’s favorite books are MMA/UFC/Boxer fighter types. So you know. Just sayin’. 😉 *goofy grin*

But it’s okay, ’cause you know what? They know each other from high school, and of course, she crushed on him then, but as her older brother’s best friend… he did NOT go there. So instant friends! It’s natural for him to already be so protective. And after hearing her “love issues” (or lack thereof) he comes up with a plan. Sneaky!! He needs to be  back in fighting form within 2 months, and offers her this deal: she focus solely on his day-long training and healing (no other patients but him), and he will help her “sex-it-up” and land her handsome doctor once and for all.

Hehe. 😉 You know where this is going, don’t you? Friends… sweet friends, that share so much time together, eventually… well. You know. And it doesn’t help that he’s turning her into a gorgeous swan, that’s right up his own alley!

Holy sh&t, she was a natural. He’d unleashed a monster.

Fun times! But he has plans for his fighting future and so does she… and well, I’ll let you enjoy the ride with them.

And that’s where I’m going to end it. Plenty of fun moments to uncover, and some that’ll tug at your heart (good, and bad). Oh and the steam? Oh yes. There be steam. *blush* 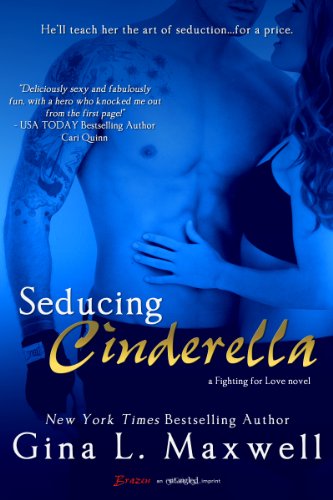 Maryse, I read this book as soon as you mentioned it a couple of weeks ago. I agree with you and in my opinion your review is dead on (as always)!!! It was a very good, sweet, “in between” book. I also gave it 4 stars… And I might even read it again when I am looking for something lighter after a crazy read.

Read it any really loved it, great read

Oh I can’t wait for this one…. It’s been a while since a bad boy stole my heart… Well not that long (*cough* Tack)… ;p

Maryse, i read this book last night and i loved it! Reid and Lucie were great together ! Doesn’t every girl want a Bad Boy that will love them and show them they are worth it. I needed this HEA after reading another MMA story that didnt end the way i needed ;p

I loved it!!! It is exactly what you said, a great in between read to take the edge off (after reading Thoughtless and Effortless, I needed that *sigh*)…that was until approximately chapter 9…when they turned on the heat and they really turned on the heat 😉 oh but the ending! Just perfect… :love:

I know this is an older post but I was wonering if you knew that Gina L Maxwell has a second book out in the Fighting for Love Series. This one is titled Rules of Entanglement. This story is about Lucie’s brother, Jax and her best friend Vanessa. This is such a good story, if you enjoyed the first you will definitely like the second.