X
You are here: Home / My Book Reviews / Bad Boys & Rock Stars / Book Review – Where She Went by Gayle Forman

Where She Went (If I Stay)
Warning!! SPOILERS AHEAD for those who haven’t yet read book 1. And while this book does give you enough background as to what exactly led the main character… here, it is still better to get the whole picture, and all of the emotion attached. And that is best done by reading the first book, in this “duet”.

So this book gave me a few things I so desperately needed.

“Ohhhh the plight of yet another tortured rock star. And this character had every right to his desperate angry tormented ways. EVERY reason. And as we live out a few days during the pinnacle of his huge rock-stardom, we re-live his agony over his loss of the only thing that mattered to him. Rock stardom was his dream, but it’s not all it’s cracked up to be, living it with a broken heart. Sure, the reason for his destruction is also what helped catapult him to rock stardom, but he just can’t get past it. And this is the book that brings us (and him) face to face with his heartbreaker.”

And that’s the gist of it. I couldn’t have said it any better. Adam’s high school rock star popularity was no fluke, and while his band was generating a “buzz”, it was the turn of events that killed his dream, and his creativity. His absolute adoration and vigilant lookout for the love of his life, her welfare, her happiness, crumbled to dust when she walked out of his life shortly thereafter.

No reason, no excuses… no actual breakup. She just… left. Oh he knew where she was (she made it into Juliard), but her lack of communication, and her eventual complete abandonment of him, did him in. His dream of becoming a rock star was second to his love for her and his dream of their future, together. He knew that there’d be a temporary separation while each furthered their adult careers, but not an actual end to it all. That, he did NOT expect.

I let it wrap around my neck, choking the air right out of me.

But one day, he bled his broken heart into new songs. His creativity was fueled by his torment and anguish. Yes. Anguish. You really REALLY feel his pain. And they became uber-famous. His band was #1. His life became everything he dreamed it would be. A famous beautiful actress on his arm, rich beyond belief, in demand. But he was disenchanted.

How does it feel that the only worthy thing you ever created came from the worst kind of loss.

Still nursing his broken heart, still dealing with the pain, he is now struggling with his intense disgust with the industry leeches that are bleeding him dry.

After the studio, I have a lunch interview with some reporter from Shuffle. Those two events are kind alike the bookends of what my life has become: making the music, which I like, and talking about making the music, which I loathe. But they’re flip sides of the same coin. When Aldus calls a second time I finally kick off the duvet and grab the prescription bottle from the side table. It’s some anti-anxienty thing I’m supposed to take when I’m feeling jittery.
Jittery is how I normally feel. Jittery I’ve gotten used to. But ever since we kicked off out tour with three shows at Madison Square Garden, I’ve been feeling something else. Like I’m about to be sucked into something powerful and painful. Vortexy.

And he’s not doing a good job at it, earning him the “bad-boy” status with his fans and peers, and disrespect of his band mates.

And then one day… despite a very full schedule, he skips out on it all when he realizes that Mia is playing Carnegie Hall. He buys a ticket, goes in to watch, and the buzz of the “famous Adam Wilde” gets back to her. And she comes out and finally faces him.

Back to the reality of the past three years. There are so many things that demand to be said. Where did you go? Do you ever think about me? You’ve ruined me. Are you okay? But of course, I can’t say any of that.

And this book is a 24 hour journey of that meeting. And what a journey it is. I had my heart in my throat the entire time. I was cold. I was angry. I was nervous. I was ADAM. ME!! I felt him, and his anguish, his elation at seeing her again, and his trepidation as to what he was going to discover on this journey.

How am I? Are you for real?

Yanira: Is it too sad?

Maryse’s Book Blog: Yanira… No not too sad. Definitely some tragic moments, and certain parts made me sad… But it’s more a series about painful events, choices, growth and change. Yep. That. But of course that can’t happen unless there are life-altering situations that spur on the changes and introspection. For all involved.

I felt good when I was done. Full.

Great book! Loved this one, even more than the first.

Interested in the series? (or “duet” as the author calls it) —> Gayle Forman – If I Stay Series Reading Order 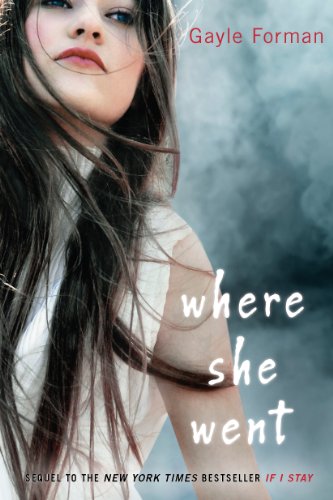 Book Review – Where She Went by Gayle Forman

I read the books after I saw your comments about them and I loved them. Thank You! And I love your review.. I still have a few books to read from your list of 25(best of 2011) and I’m sure i’ll love them all(because the rest of them I read – it’s also from your recommendation). Keep it up!!

Thank you Tina! I’m hoping this year will be full of books like these that keep us up all night! 🙂

I would have never in a million years thought a second book could make the first book better, but that is so how i felt with ths duet……brought the story full circle

Loved this one more than the first book.

Read them both! Book 2 just blew bk 1 away IMO! I liked bk 1 as well, but Adam’s POV was so heart wrenching and and this bk gives you such closure! Loved it!!

PS! You really need to read them both though or you’re cheating yourself!!

I read this book a few months ago and I really liked it too.
This story for his pov was so hearbreaking… I really felt bad for him, much better btw.
It’s a very nice story. And it looks like it’s going to be a movie about the first one right!? Dakota Fanning would be Mia, but she droped the role, i don’t know why… I hope it will be good.

Oh wow Carla! I had no idea these would be movies. Great!!!

I loved this book. I still think about it and it’s been months since I’ve read it. Gayle Forman did an amazing job. I felt what Adam felt. It was so real. Intense.

This will remain one of my all time favorite.

Me too, for sure. And he had every right to his feelings. But then… I completely understood the other side of it, too. Glad we got it.

I read If I Stay and cried my bleeding eyes out. I never cry during books. Well not much. At the end I was heart broken. And at that point I didn’t know if I wanted to read where she went. I didn’t know if I could take the torment that I knew was going to happen after the emotional upheaval of the first book. But I did. And it was so worth all of the angst and emotional trauma I felt during book 1.

So thank you Maryse for giving me yet another outstanding recommendation!

Read some reviews for this book with quotes that almost broke my heart and I don’t even know the characters so I definitely have to try these books now!

Did this book have an HEA?? I can’t get anyone’s definitive answer on that lol which is making me wary… I don’t mind heart ache but I need a happy ending…

Aestas… the ending was great. If it is an HEA I can’t tell you, because the fun is in the stress throughout the entire read, and you can’t just “know” the end, ’cause it’ll break it. But. I felt like I was satisfied with “where it went”. LOL!

The movie and the book if I stay are really good(: when I got done reading the book I cried just a little lol. But when I watched the movie I was ballin my eyes out): it was so sad): but I can’t wait for where she went comes out in theaters(: and I yet still to read the book where she went lol