X
You are here: Home / Archives for vampire academy

Olivia: If you’re a V.A fan , then you should definitely read the spinoff series Bloodlines by Meade. A lot of character crossover & just as addicting!

Kim: I am really looking forward to continuing the story of “Adrian & Sydney”…Richelle Mead has done a super job with her spin off from her Vampire Academy series about Dimitri & Rose…

Populated with new faces as well as familiar ones, Bloodlines explores all the friendship, romance, battles and betrayals that made the #1 New York Times bestselling Vampire Academy series so addictive – this time in a part-vampire, part-human setting where the stakes are even higher and everyone’s out for blood. read more

Well, thank goodness that’s not exactly the case, but, it sorta is. There isa spin-off (6 books long – yay!!). I was *hoping* the spin-off was going to be a more “mature” version of our favorite main characters living an adult life, and adjusting to their new world. Perhaps, but I hear the spin-off will mostly consist of other characters in the series, and each book will focus on one. I’m so there! I already know who I want most of the focus to be on, by I won’t say, so that I don’t spoil it for you 😉 read more

Last Sacrifice (Vampire Academy, Book 6)
Right. Like I even needed to tell anyone that 😉

I AM ADDICTED. BUT! I’m only 45% through. Yup…I got a late start last night (stupid responsibilities!) , and now I’m suffering cause I’m back at work with an “itch” that can’t be relieved until 6pm!

Soooo shhhhhhhhhh!! Don’t tell me anything!!! Of course you can comment, and even torture me if you must. But I must not know the truth. I know you all know now. But I’m going to live in the dark today for the whole day. I’m not checking out other blogs, I’m not even going to surf the net, or Amazon for fear I accidentally run into some spoilers. read more

Hey guys!! It’s up!! It’s up! The first chapter sneak peek of her upcoming (and final book in her series) Last Sacrifice (Vampire Academy, Book 6)

OH!! I just realized this is coming out THIS TUESDAY (December 7th)!  I so know what I’m doing on Tuesday! Some  books will just have to hold, I guess 😉 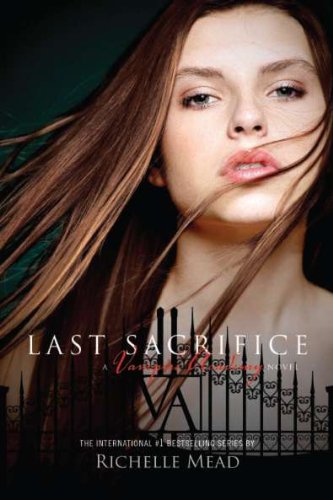 Spirit Bound: A Vampire Academy Novel
Okayyyyy…looking around, everything looks in order. Looks like Lily took good care of my place while I was gone. Smells a bit different, though? Paint? That “new paint” smell, ya know? Wait, is that…a new couch? Wow, a slew of guest comments while I was gone…Lily sure does love to enterta….

Deep breath…deep breath…at least you all had fun while I was away. That’s all that matters. I asked her to keep you company and that, she did! read more