Born of Fire
My Sherrilyn Kenyon marathon continues! Thank goodness she has written so many exciting books, as I have been thoroughly captivated since late August with her work 🙂

The latest one (that I finished last night) is the second in her “League” series called Born of Fire (Syn’s book).

In book one, halfway through the story, Syn (Nykyrian’s best friend and associate) disappeared (his immaculate house left in shambles).

In book two, we see life through Syn’s eyes, including yet another tortured childhood (he was raised by an evil, notorious murderer), that cultivates a tough exterior and houses an insecure and saddened heart. Uninterested and disillusioned with love (especially Nykerian’s new love interest), he is determined to avoid any potential attachments. read more

Sins of the Flesh: Paranormal Romantic Suspense (Sin Hunters Book 1)
This recent release had me entertained. While it did not involve any characters from her other vampire series that I love, it did have an interesting paranormal twist.

World renowned cellist “Caterina Shaw” had gone blind, and was suffering terrible pain due to a dangerous tumor. While her death was imminent, she wanted to live out the rest of her days without the pain that has caused her to quit her music altogether. After agreeing to an experimental gene therapy, that could ease her pain and potentially give her sight back, she realized (after it is too late) that she has signed on for more then she bargained for. read more

I’ve been out of the blogging loop as of late, I know. More reviews to come shortly…

Ok, off I go. Mama’s reading her stories (tee hee!) 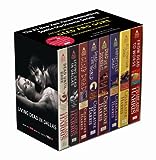 Many of you die-hard fans out there may already know about this, but I can honestly say I had NO clue, until someone asked me, when the next book in this series was being released.

Well not only did I find out (release date: May 2010), but I also found a synopsis, and the title (Dead in the Family), on Wikipedia. Since I had no clue where the story was going, (considering how the last book, Dead and Gone, ended) the synopsis DOES lend itself to revealing a few spoilers. Spoilers aside, the story is not ruined for me at all, and this looks like it’s going to be my kind of book! I can’t wait!! read more

Here it is again;

THE FRIDAY FINDS ARE UP INCLUDING THE LATEST by R.L. Mathewson!!! 😀

SO MANY 5-STARS FOR THIS ONE! BACK ON THE LIST YET AGAIN 'CAUSE KATHY 5-STAR LOVED IT TOO!

Kathy: I just finished If We Disappear Here by M. Hayes. I am making my husband read it! Thanks for the recommendation. Definitely 5 stars for me. Some plot twists and I agree a few I expected but definitely a page turner.

Mona: Finished If We Disappear Here by M. Hayes yesterday. Holy moly, I could not put this book down! Maeve wakes up in a cold cement room, looks around and sees a man, but he is not her husband. They have been kidnapped and locked in an underground bunker by a man bent on torturing them. Maeve and Ledger try to figure out why they were kidnapped, what is their connection since they’ve never met, and where are their spouses? This is suspense with a little romance thrown in. There are twists you see coming and some that are surprises. This is a new to me author, but I’m headed to Amazon to download more! 5 Stars for me and it’s KU!

If We Disappear Here

If We Disappear Here
View Comments

I’m not finding it on audible. Do you know if it has been released?

Reader Question – The biker book about the girl named Tempest who had 2 siblings that were “club girls”.

HAVE A GUESS FOR THIS ONE?

I POSTED IT IN THE FIRST COMMENT: ... See MoreSee Less