X
You are here: Home / My Book Reviews / Book Review – And With Madness Comes the Light by Karina Halle

And With Madness Comes the Light (EIT book #6.5)
This review isn’t really all that “spoiler-y” but for those new to this series, you *might* want to skip this. Although… you may fall for Dex just on this review alone. 😉 Tee hee!! But I ADAMANTLY recommend this series ’cause it’s one of my favorite series of allllll time!! You can start from the beginning (book #1 is free right now)
—> Experiment in Terror Series Reading Order

Right off the bat, I’m giving this “Dex POV” novella 5 stars!! To be afforded the opportunity of re-living many key scenes from the Experiment in Terror series since that big crazy moment at the end of book #4, that put us all in a frenzy? I’m going to say it’s perfect. P-E-R-F-E-C-T. Any time I can spend with Dex I. Will. Take!! And, to go through some of that really hard stuff in the mind of the one I was SO mad at… is an interesting perspective for sure.

His thought processes, his perception of things, his reactions that were opposite to what he was feeling. And then his incredible downward spiral. We went through that agony with Perry… as Perry, but to live it through Dex hurt me just as badly.

That was the ball-sucking thing about heartache. It didn’t follow logic or physics or any sort of rules. It wasn’t that you started off with grief and then slowly got better. It was a roller coaster of emotions. From hate to love and back again.

Even though I already “know” what happens (well… so far, anyway), to re-live it through Dex’s eyes (especially, when at one time I had no idea what was up with him…) is simply icing on the cake of this awesome series.

And what I love about this author, is how true to her characters she remains. Dex is always and forever 100% Dex, no matter where you are in the series. Pompous and cocky (and quite funny in his sarcastic ways). He’s brash, unapologetic but so outgoing. It’s as if he “should” be the brooding bad-boy type, but he… isn’t. Okay… he is. And he isn’t. 😉

“I don’t need anyone’s help getting laid. I never have.” I didn’t need to brag but… okay, yes, I totally meant to brag. I pulled back the sleeve of my t-shirt. “And look at these guns.” I eyed Dean. “Don’t you dare show off yours, cuz that’s not fair. But seriously, with these guns and my face and my d$ck, women are completely powerless.”

Tee hee!!! *excuse me while I fall for his arrogance again*. Gah! I’m SUCH a sucker!! I’d probably be one of those “powerless women”… *hangs head in shame*

Every moment of his bad attitude makes me swoon. Oh yes… my brain goes UGH!!!!! But I crush on him even more. I know. That’s pretty bad that I love it when they’re jerks. But no. He’s NOT a jerk. He just can be, and seems to just shrug it off whenever it suits him. And I love every moment of jerk-Dex. Not your typical knight in shining armor (heck no!!), but in his own way… better.

We get to know the other “true Dex”, and my crush on him is justified. Amplified. There’s so much more to Dex than meets the eye… nothing perfect or outrageous. Just him. A real guy with a 50% sweet side. His sincere heart frequently shines through his egotistic persona (no matter how hard he tries to stifle it). Egotistical yet genuinely sweet. Both are 100% him. He believes his own hype, and so do we. It’s hard not to, as hot and self-assured as he is. He’s a smart-ass and he’s funny, but he can be angry, too.

For the first time in a while I was able to ignore the heartache- the extreme, gut-wrenching betrayal-as anger came buzzing through me like kamikaze pilots. I was mad. I was livid. I was enraged.

Like all of us, he has a certain darkness about him…

I welcomed the anger with clenched fists and open arms.

Insecurities and pain that he hides well, but are just as much a part of him.

I felt like I was choking. My words came out hoarsely as I gasped for air, as I allowed myself to feel. “It hurts more than I know what to do with. I can’t handle this. I can’t.”

To know Dex is to love him. And every once in awhile, Karina Halle totally indulges us and let’s us have him. Everything that went through his mind in this one, ran through my heart.

I was sucker punched right in the heart. Right in the mother%&king heart. It stopped. My lungs stopped. Everything stopped, hanging in the room with those words.

Okay yes. This series, as a whole, is about much more than just Dex and the realistically angsty love story of Dex and Perry. After all, there’s all that craziness going on that makes them who they are… er… ahh who am I kidding? All that “extra-scary” stuff is exciting, and fun, and creepy, and all that, but really? Yeah… it’s all about Dex and Perry (and us!!). *grins*

An entire series that teases us over and over, gives… and takes back. And every once in awhile… you get a POV like this.

Have I told you how much I love this series, lately? 😉

I am a Dex addict and he will forever be one of my #1’s. Yep. THAT is how deeply he affects. Little by little, book by book, and in no time, you will be in the same boat as all of us Dex-fanatics. You cannot escape it. And you will be thrilled! Am I right, girls?

At the end of all that, instead of feeling guilt and shame that I normally felt, I felt alive and determined. Maybe I was growing up. Maybe. 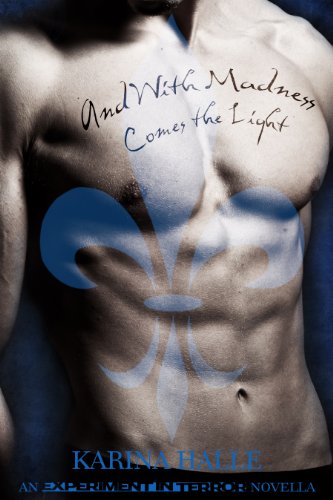 I love that Karina did this from his POV. To see what took place in his mind during an overall awful personal time for him and Perry is enlightening. Of course this made me crush a little harder on Dex, and made me all the more anxious for the next in this series.

I agree, I loved this book! It was just what I needed to pull me out of my Jameson fog after finishing the Racing on the Edge series, but now I think I have to go back and re-read On Demon Wings and Into the Hollow

I melt for Dex! The ending just broke my heart all over again. I can’t wait to know what happens next with Perry & Dex. This is one of my favorite series of all time 😉

Can’t wait to start this series. Sounds like another series I’ll be adding to my ‘favorites’ list.

I started EIT last week after reading through your posts that Dex was one of your #1’s–because, you know, I feel like we would have similar taste and all 😉 And now, a few days later, I’ve blown through every book in this series and am anxiously awaiting Come Alive! THANK YOU for the recommendation (and I’ve now recommended EIT to ALL of my friends)!

Ok, I have to ask…how scary is this series? I read “The Devils Metal” and lost a good nights sleep. However, I couldn’t put it down! And I loved “Sins and Needles”. Oh Camden 🙂

Awwwww I loved your review!!!!!!! I know longer wanna throat punch him…..not even a little hell after being in Feds head for a bit once or twice I wanted to throat punch my girl Perry!!!!!!! Sighing……..we gotta wait till June!!!!!!

I read it the day it came out. Un-freakin-believable!!! I loved Dex’s POV! My heart broke all over again. It seemed even more painful because you know how much Perry has gone through, too. But reading Dex’s POV makes me love him even more…is that possible? Oh please Karina, please please please give us some happy Dex/Perry moments in the next book. My heart needs some super-sappy happy moments for them, and a few hot one wouldn’t hurt either. 😉

I just finished this book and yes, I would have to say that this series will be right up there with one of my most FAVORITE series to read. VERY different from any other series and NOT predictable AT all!!!
I am really looking forward to meeting Karina Halle at the BOOK BASH!

Can I just say that I both hate and love you for recommending this series. Ok – mostly love 🙂 here are the reasons: 1) I was so hooked all week and read the entire series. I was so spooked too since I mostly read at night while my husband and daughter are asleep. One day while reading in my car at lunch, a bee flew in my car! What are the odds? 2) I lost many nights of sleep on this series and cannot get enough of Dex Foray. He’s almost at Kellan Kyle status for me! 3) lastly, and the worst part is that I am now being tortured while I wait (very impatiently) for the next book. Thank you for all of the wonderful recs. I love everything you recommend!

Ack!!! Those bees scenes are so eerie… I’m so happy you love Dex like I do! *heart*