Awakened (House of Night)
Well, this concludes my House of Night marathon, and it’s been quite the journey. From early “meh” moments, to absolute elation. From heart pounding situations that had me staying up all night indulging, to crestfallen disappointment. I developed an almost unhealthy preoccupation with Erik’s tenuous situation and became bitter towards the author’s mid-series change of heart. And then, a bit of an upturn when the author distracted me with a new and intriguing focus. One thing I can say for sure. This series made me feel and overall, that’s a good thing. Unfortunately, the last few made me feel more drained and aggravated than hungry for more.

The latest installment has us all back in *our* realm. Zoey and Stark are re-cooperating (and getting very intimate) in Scotland, and the rest of the group are at the House of Night in Oklahoma, trying to get back to basics.

Neferet has also returned as the school’s High Priestess, and has been forgiven by the vampyre council cause she’s still got ’em all fooled. Really? Yup. She blamed it all on Kalona claiming he had “beguiled” her. Uh huh. Those wise ancient vampyres, each gifted with extraordinary powers, holding such a prominent position in vampyre society, and they’re still duped? Well I guess they’ll deserve the backlash, when she once again almost destroys them all. Guess everyone needs to learn in their own way.

I just assumed with the recent carnage (you know…teacher slayings, destruction of the school, her summoning of absolute evil to rule by her side, the creation of a new kind of evil vampyre, her insistence that she was their own Goddess, Nyx, re-incarnated etc etc…and there are LOTS of etceteras), that maybe, just maybe, they’d have a better handle on her bluff.

So anyway, bad stuff and sad stuff is happening at school (surprise surprise with Neferet and her darkness always nearby) and everyone decides they need their true high priestess back. Zoey needs to suck it up, and know her role, and she reluctantly concedes.

And while all of this is happening, where is Kalona, the evil fallen angel that she has supposedly whipped and banished from her side for one hundred years as  punishment? He’s right next to her, but not by his volition. He has broken his oath to Neferet, by allowing Zoey to live, and he must now pay with his immortal soul.

The immortal lifted his head and threw his arms wide as if he would take on the heavens. “She still imprisons me!” he shouted.

Even he recognizes pure evil when he sees it, and he’s just biding his time until he comes up with an evil li’l scheme of his own. But how can he escape now that she controls his immortal soul forever. Or does she?

“Neferet has been immortal for less than a breath of this world’s time. I have been so for uncountable eons. If there is one lesson I have learned over several lifetimes, it is that there is nothing that is unbreakable. Nothing. Not the strongest heart, not the purest soul – not even the most binding of oaths.”

And then there’s Stevie Rae and Rephaim. A real hard-luck story, that one. She’s a red vampyre, who has chosen the light, a high priestess selected to protect and lead her kind. He’s born of evil and destruction, half bird, half man. He was at the center of the recent massacre, the one they hate the most.

He’d touched Stevie Rae and imagined, for just a heartbeat in time, what could have been.

He could have loved her.

He could have protected her.

He could have chosen Light over Darkness.

But what could have been was not reality – was not to be.

He’d been born of hate and lust, pain and Darkness. He was the monster. Not human. Not immortal. Not beast.

His father wants to use her for his nefarious purposes. Her people want to extinguish him for what he is. How will their love ever be accepted?

Oh and Erik…yeah. He had a part. *hrmph* I….ummm….should I say it was sweet? There was closure? Yeah ok, let’s go with that 😉

So overall, it was good. It wasn’t all consuming, but there were a few interesting and captivating moments, to be sure.

But it’s over. For now. And to be honest, I’m not sure I’m coming back for future books in the series. Of course, maybe all I need is a bit of a vacation from Zoey and the “super-best friends”. I’m not saying no more, ever. Just glad there’s no more right now. I need to go play with the adults for a bit 😉

OH!!! This book was sent to my by the publisher for review purposes, and I’m now giving it away to a lucky reader. Just leave a comment, and by Monday February 28th at 8pm EST I will randomly select a winner. U.S. residents only please. Don’t worry about address details, until I email you. 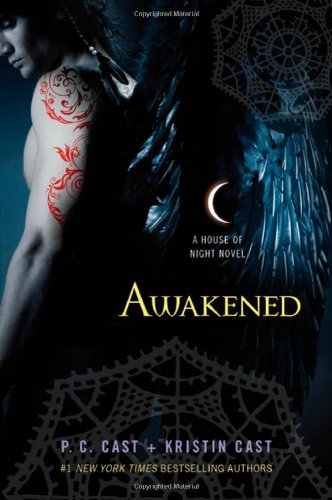 I loved this series. I have read them a couple times. I loved Aphrodite’s character, “hang from hell”.

It seems like I’ve been waiting for this one to be “out” forever. I can’t wait to read it. Thank you for the review!

I would love this book. It took kinda forever to come out though. Great reviews. no spoilers and fun to read

thank you for the review! I cant wait to read it!

Okay, I need to read these books already!!!

Would love to win the book! And then I could pass it on to my little sis who is dying to read it too. Thanks for the review.

Oooohhh, pick me!! I want to read this one!

Penny!! The Randomizer chooses you. You win the “Awakened” book, so yes. It’s time to get reading 😉

Thank all of you for entering. I will be giving away many more books, so stick around…

P.c. Cast and Kristin Cast are now my FAVORITE authors after I read the series.. the library near me doesn’t have the last book 🙁 I NEED to read it!!!!!