Frayed <— GAH!! I just read an amazing book that I was SO into from start to finish. This was a debut novel? GET. OUT. I can’t even believe it. FAN-FREAKING-TASTIC. R. Renee came to us screaming “YOU” vibes and boy was she right!!!! But it’s not at ALL the same story. I promise. Though that feel is JUST right.

AND what’s best of all? We BUDDY READ it!!! Group read of freak-outs & reactions!! LOL!

R. Renee: Guys!! This is Layne’s debut psych thriller. Some of you know her from the GR PFM challenge group. I started it this morning and I can’t put it down!! I went in blind so I have no idea what’s coming but at 16% it’s giving me serious YOU vibes!

A love story to be sure… but with some psycho added to the mix. Psych-thriller love story? OHHH YESSSS!! And strictly from one POV so I had NO clue what was going on but I was hooked. It kept me guessing right to the very end. And then got me BIG time. Twice. *thud* <— I fainted.

And here’s the thing. The first reveal was incredibly cool and “enough” for me to be floored and thrilled by. It could have been the only big reveal and I would have been so satisfied.

But when we were gifted that second reveal? And even… a third reveal? MY. JAW. DROPPED. Tee hee!!!!

Marissa: Frayed by Author Layne Deemer is so damn good! I could not put it down until I finished it!!

Maryse: I AM SO EXCITED!!!! I’m a psych-thriller addict and now this is the second recommendation saying how good this one is!!!

R. Renee: I’m so curious what you think! The writing is super clever and I love the subtle humor, like he’s clearly smarter than everyone but without the need to gloat.

Michele G: I finished Frayed this morning….it was so good!

R. Renee: I’m about 60% into Frayed and still loving it. It definitely feels more character driven than plot driven so far, which I love, but I think that’s about to change. Something’s brewing and I won’t have time today to find out what! 😬

Maryse: I love how OCD he is and he’s kind of dark and moody and not in the least bit friendly (at least… being in his head -which I’m enjoying), so I’m so curious who could possibly be stalking HIM.

Nay: I’m at 80% in Frayed and LOVE! And I adore the way Owen is written. I can’t wait to find out what happens next. Getting ready to sit down and finish it.

R. Renee: It grabbed me right away because I love how she wrote the protagonist. It reminded me so much of You. But it’s not action based. It’s more of a gradual suspense.

Nay: I finished Frayed and loved it! I had trouble putting it down throughout, but when I got to 60%, I was glued to the pages! Such a fresh, unique storyline!

Maryse: I’m halfway through and LOVING IT!! Excellent writing and I’m right there with him… and pretty nervous (and excited) as to what’s going to happen. 😀

Maryse: GASP!!!!!! I just hit the reveal. *thud* *picks myself up and dusts myself off* And yes, it captivated me from start to finish too, ’cause it was all from HIS POV and it did have that subtle creep-factor along the lines of You (and a love story or two, to boot!) 😀

R. Renee: I finished it this morning! Loved it! Trying to write my review now. So far I’ve got, it’s crazy AF. Read it! 😂

Okay so… Owen is quite the loner and a minimalist. He likes things “just so” and has no desire for attachments (other than his pet cat that he adopted ’cause the cat’s aloofness reminds him of his wise uncle, and also a grouchy bookkeeper near his apartment). He prefers an uncluttered life, and a very simple, though throughly focused job.

My job is a whole lot of m words: monotonous, mundane, mediocre. And that’s exactly what I like most about it. Every day is just like the one before. I’ve been here for nearly three years and nothing has changed. It’s all well within my control.

He’s one of the high level “quality control” inspectors for… socks. 😉 He has one job to do, and he does it right!

The visual thrills me. Stripes mean more work which equates to less of a chance for me to interact with another human. And that’s always my end game.

While he’s quiet and keeps to himself on the outside (no real friends, no consistent connection to family) his mind and inner dialogue reveal a somewhat sarcastic, pessimistic and at times, smug (yet witty!) character.

We all have a breaking point.

My co-inspectors are all clamoring to find out what drove 8 to snap in such an extreme way. I never worry about the why; it’s the when that we should be concerned about. It’s only a matter of time for any of us.

AND I LOVED being in his head.

But things kick into high gear when the company hires a new sock inspector (the one replacing an inspector that “snapped“) that he soon develops a secret crush on. Lydia’s grace and gentle approach intrigues him. And when he starts receiving “secret admirer” notes (right about at the same time as she starts working there)…

…why me and why now? And is it a coincidence that I found it after I met my new coworker? My insides flutter at the thought of her hiding a note for me to find.

The person who wrote it wants me to know that they notice me. Maybe it was her or maybe it’s someone else just trying to f*ck with me. Maybe it was just a onetime thing—someone was bored and decided to play a little joke on me. I’m going to ignore it for now. I can only handle so many complications at once.

…he turns the acquaintance into something more.

She’s never uttered a single word to me and yet, just knowing we’re in the same room, breathing the same air, brings me total peace. It’s a kind of tranquility I haven’t felt in nearly three years. It’s as if all is right in my world as long as she’s in it. It makes no sense. I don’t even know her.

But if I’m being honest with myself, we do know each other. We’re just on a different level than most people. My soul knows her soul. I felt it the moment I first laid eyes on her. And it’s there, in that crowded market, that I make a promise to myself. I will get to know her on every level that she’ll allow.

And that’s where I’m leaving this. As their friendship develops, so do their secret pasts (secret to the reader, too) that haunt them both and that they are privately trying to cope with.

I don’t scare easily, so she has nothing to worry about. But then again, maybe she does.

And as things start coming to light, that delightful insidious chill comes into play. Subtle at first… and fun to guess.

Various guesses had crossed my mind in one way or another, including subtle versions of the actual truth – but I couldn’t be sure, so they were still an absolute delight. Darn clever in the grand scheme of the development of these characters and their story as a whole.

And that third reveal – I didn’t even clue in to that at all and did NOT see that coming.

5 STARS of absolute psych-thriller delight!!! <— Victims? Villains? Good guy or bad guy? Who is who? 😉 These are my ultimate guilty pleasure, ’cause we get to explore the human psyche with relatable moments in the real world, family, love, jobs… with the potential for not-so-normal obsessions. And all the reasons why, when it comes full circle. CLEVER!!!!

And that gasp-worthy ending!!! I love when a book does that to me!!! 😀 *claps and claps*

➔➔➔  Love this genre? Browse more psych-thriller and stalker features and reviews on my blog. 😀 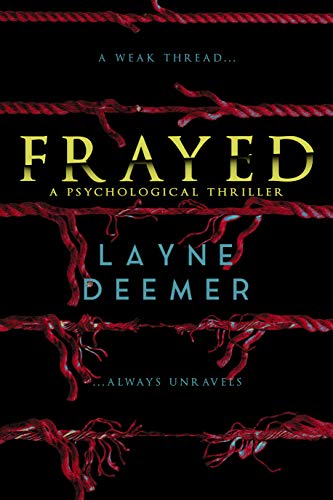 I can’t even believe it.

I will read whatever she writes next!!! I hope it’s more like this!! 😉

So brilliant! Can’t wait for more from Layne Deemer. This one is an absolute must-read.

My mom is a huge fan of yours and showed me your favorite books of 2019 list. I have read so many on there and just finished this one. WOW! This was a hard book to put down! I loved it.

OMG that is so awesome. You made my day with this comment!!! 🙂 And I see we have the same book-taste. 😉