My Fair Succubi (The Succubus Diaries Book 3)
Zaaaaaaanne!! *phew* Ok now that I got that out of the way…let’s review 😉

I was highly anticipating this book, and it did deliver! However, I won’t tell you if it gave me exactly what I wanted, cause well, that’ll just give the whole thing away, now won’t it? It did have plenty of risky situations with enemies from the good and the evil side (enemies from good? yup! Angels aren’t always very nice).

Lust and love flourish in this installment, and true to the series signature style, it was all wrapped up in Jackie’s snarky, almost naive hilarity.

Actually there’s way more to this book than that, but, that was my favorite part 😉 .

While the guys reluctantly accepted “sharing” her in the past (she’s a succubus, don’t forget, and requires frequent “appeasement”), things are getting irksome as each man is falling in love with her, and her with them. While it made sense in the past to “share” the duties (a new succubus has frequent needs), now that she has more experience, and requires less support, the men in her life that have come to know her, care for her, and protect her, each want her for their own.

Noah get’s a break when Zane (in book#2) leaves Jackie in Noah’s hands for good (or so it seems). Zane’s own maker, the vampire queen has summoned him back to her side. He either serve her exclusively, or she will kill Jackie. And I “prettied” it up for you. Basically, she’s pure evil, and pretty much tore his wings out, feather by feather to prove her point.

He was probably being punished for his affection toward me. He was bound to her, having exchanged his freedom for mine. Searing pain filled my chest.

In this installment, Jackie and Noah have lived, seemingly in bliss, together for months now, as he has funded her archeological expeditions, and followed her to the ends of the earth. To his dismay, however, she refuses his marriage proposal. Well, maybe not exactly refuses…more like stalls.

“That’s not exactly the reaction I wanted to hear.”

I stared at the small box, unable to move my hand toward it. I knew – I just knew – what it contained. And the dreadful knot forming in the pit of my stomach told me that I didn’t want it.

“Just tell me, Jackie,” Noah said, approaching me. He took my hand in his and clasped it against his chest. “Tell me honestly that the reason you’re saying no isn’t because of Zane, and I’ll let the whole thing drop.”

Emotions aside, Noah and Jackie have bigger fish to contend with, when they are summoned to the Serim council to pay for their crimes (him, for having illegally made her, and her for well, being ummm…promiscuous? That, and well…defending herself against another immortal that was trying to “off” her, or was it… trying to get her off? Or both? *blush*).

Really though, that’s just an excuse to tie her to a deal that puts her in quite a bind. While they imprison Noah, she can free them both by:

“…hired muscle, free of the curses of Serim and succubus. And they are steadfastly loyal to the Serim and to the side of good.

or something like that…I dunno, lot’s of options, none of ’em good (for her at least).

So anyway, she goes back home, without Noah (but with an assigned protective “Enforcer” of her own – heavenly to look at, yet quite prissy and extremely virginal) . She quickly discovers that her best friend Remy is missing (her possessor, that evil Archangel that has taken her over again), and she’s (he’s?) sucking all the powers from the local vampires and getting stronger by the minute.

Now the Vampire Queen is worried, as it is her very subjects have been affected by Jackie’s possessed best friend (and she’s probably next). So Jackie is summoned to a “vampire party” and offered a deal by the Queen.

Yet here I was, mingling at her bizarre party like some sort of vampire groupie. It made my skin crawl to think that she had invited me, and I had taken the risk to see Zane again. Now, looking at her face, I wasn’t sure I’d made a wise decision.

GET HER THE HALO or else. Wait…why is it again, that everyone thinks Jackie is the one that can achieve this?

The Queen loosens her literal leash on him (slightly) and assigns him (he is her strongest vampire, after all) to assist Jackie in finding Remy, and remedying the situation. However, I wasn’t allowed to get excited. Zane had a shock collar. Yup! Make it with the succubus and suffer the consequences. And if the shock collar wasn’t enough, he had a fellow vampire queen butt-kisser (keeper) “trailing” them to “help” them, and keep them in line. Yeah. This gets really ugly (and kinda hot!) 😉

Oh and… we also find out why Jackie was “changed”. Yup, there’s a story there. She wasn’t just a random “vampire feeding”, you see…

So I’ll end it there. I gave you the essence if the story…. good and evil want the same thing for the same (yet completely different) purposes, and Jackie is the key to getting it. But come on…let’s quit fooling myself. We all know why I read this one obsessively. And I did. It was an all-nighter 😉 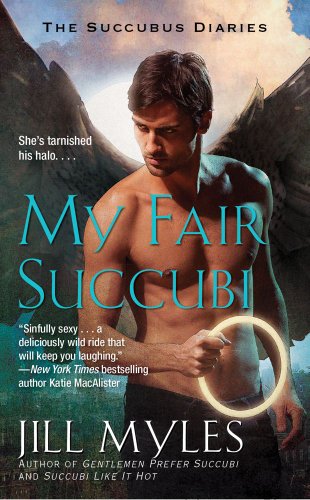 But, did it live up to what you wanted?
Has the whole series?

Hi Lis! Yes, this series was definitely one of my fav’s for 2010. Made me sigh, made me laugh. Easy reads that had you anxiously awaiting the next in the series. And as per Jill Myles, the series will be continued YAY!! But does that mean the current “ending” will change? I wonder…

hmmm…Then I guess I’m going to have to add it to the list. I am so glad I found your site. I was on Google and typed in “something to read after Twilight” and there you were! I’ve found new authors on here that I’ve never heard of and am so grateful! Keep up the good work!