Unbound: (InterMix)
This author is apparently one of my favorites, ’cause it seems every one of her books I’ve read, I’ve loved. Each one of her stories is unique and unforgettable, often exploring a more taboo look into “adult-life”. Having personal (and very private) desires, her relatable characters might just complete each other. But not without a bit of personal turmoil and angst in the mix.

But what I especially love about her characters is that we can see ourselves in them. Them…in us. We can recognize (and relate) to their adult lives through their worries, their habits. Their boredoms. Their hopes and their dreams. Their disappointments and their achievements. And even in their need for more. Because, you see… each one of her characters (at least the ones I’ve come to know) has his/her own very particular “twist”.  But… we can often relate to that, even. Whether their *quirk* is ours or not ours, by the time we reach it, we take it in and experience it like out own.

Sharing such deep-seated secrets with a potential stranger can be scary. And very exciting! I’ve learned so much, on a very “behind the scenes” level reading her books, but not just in action. In thought. In personal introspection. I’ve not just learned OF certain things, (certain “needs”), I’ve learned about the actual feeling of that need, too. Whether we ever get the “why” of it or not, for a short time, we “get” the actual inherent feel of it. The compulsion. And the fear, or acceptance, or adaptation of that compulsion.

And when things start… happening… whooooo!! *fans self* Sometimes a bit of shock and/or awe at first, her stories are some of the hottest of ’em all! But not so much “torrid” (even though they are vividly detailed ;)). The feel is more… intimate. And always intense.

Whoa, right? What the heck have I been reading? Some are more shocking, some are more sweet (and shocking) and some are just plain HOT! But no matter what, each one has a twist that makes her stories absolutely unforgettable. Just take a look at these reviews, and you’ll see each one explores a very different subject (with “After hours” being my favorite so far). 😉

So when I saw this book on this week’s release list, I was already excited. But it’s when I read a SERIOUSLY passionate recommendation by a very popular author (Maya Banks) I jumped on it immediately! What she was saying about the book registered deeply with me, because it’s how I felt about this author’s other books, too. I knew this was MINE!

And she was right. This book is not for everybody (the subject matter dealt with is er… well). Well actually *shrug* I was good with it. 😉 At first I thought, “Oh? I don’t usually “go” for this.” But I was so invested in these characters and their plights that I was ready to take that journey with them. And what surprised me (what TOTALLY GOT ME) was how deeply I was able to FEEL… it. And then, how deeply I was able to experience and feel, the other “it”.

Lori: Thanks for the Cara McKenna recommendations Maryse-reading Unbound now. After Hours is on my favorites list! and loved Willing Victim as well…gonna check out Curio. Apparently, she’s a favorite of mine as well! I love how real her stories are

Chris: Thanks for the recommendation….just one clicked!

Maryse’s Book Blog: You guys are gonna have a blast with them!!

Kandace: Maryse, I’m seriously trying to figure out how you are going to write to review of Unbound without devolving his… errr “issue”.

Lori: Yes, I far enough along to wonder as well… lol

Kandace: She could call it the little “s” issue.

*giggle* Ahhhhh so my thing, despite my initial “Hey! That’s not my thing!” reaction. 😉

American-born Merry is out to “find herself”…

Perhaps Lauren, like Jason, had preferred the old Merry, the Merry who’d bent over backward to please the people she liked, who’d put herself last. You’re welcome to her, she thought, stuffing her sleeping bag into it’s sleeve. This new Merry’s off to walk across Scotland. She she’s not coming back until she’s f$%king found herself.

… hiking through Scotland (where her mother was from), but instead finds… a stomach virus. Or  bacteria or… something pretty gross. And painful. 😉 Out in the wilderness on her own, she treks back until she finds a tiny cabin and bangs on the door begging for help. Her insistence pays off! The uber-recluse (albeit very good looking if you can see beyond the messy hair and scruff) finally answers the door.

“I may be dying. I’m not sure.” The door opened wider.

And reluctantly, he lets her in. Awkward at first, but Merry is in no shape to worry about such things and she settles in for a day to recuperate. Except for *that* voice that keeps worrying her about WHY he’s such a hermit…

“Sorry. You know, for intruding this way.”

“I’m sure it wasn’t intentional.”

Not the warmest reassurance, but fine.

“Still queasy, But stabilizing, I think. Or maybe I’m just not so dizzy. So are you retired, or…?”

From what? And how, so young? And why do you live like a hermit? What’s your deal? Are you a serial killer?

“My entire life puts me out.”

*clutches heart* Back then… I didn’t “get him” yet… (melodramatic much? *shrug*) but now, re-reading the initial parts that I highlighted, my heart breaks…

With no other humans about, he was nothing more than an anonymous mammal – breathing and eating and living. But in the company of other people, he couldn’t help feeling he was the worst his species had to offer. Gluttonous, weak, spiteful.

And all Rob wants her to do is leave, but as hermit-y as he is, he has a sense of decency too, so he pushes passed his aversions and helps her. A day stretches to two, and then… three. And as they spend more time together, the awkwardness shifts into sweet hesitant friendship. And that’s what it is, friends. Days of just… these two. In their quiet abode. In their private sanctuary. In their stranger-ness. In their budding friendship. In their burgeoning sexual awareness of each other. It’s just been a few days, but in these circumstances, in their own private bubble, without prying eyes or judgement… they really get to know each other.

And we get to know him.

Even out here, a man still had his secrets.

There’s a reason he’s out there on his own. Alone. For a few years now with his pain, his shame…and his secrets. And Merry who is so willing to take them from him. But how much can she take? And how much is he willing to give her? To trust her with? Oh this journey is a bittersweet one.

He wanted to share something – she could taste it. But more than that, he wanted it to stay hidden.

And I’m going to leave you here, and hope you’ll take the journey with them, as I did. It’s so much more than… “that”. Oh… that is there, oh yes. But there is such depth to this author’s characters and Rob is no exception. He’s a bit broken, so very human, and… despite my initial reaction, I grew very fond of him.

Why not 5 stars? Well, for me, it’s that whole “more” thing. You know me. I LOVE to lose myself completely for days on end (even after I’ve finished the book). I lost myself well enough, while reading this (and after), but maybe not at my 5-star freak-out level. The writing however, is TOTALLY 5 stars. And the way this author writes… often, less if more. So for many, I could see this being a 5-star read. 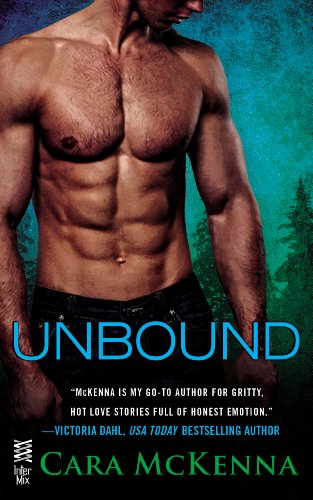 I just finished this myself, and loved it! I found it surprisingly sweet and touching, given the subject matter. I”m a big Cara Mckenna fan, and as usual, she didn’t fail me. 🙂

I love Afterhours, as well. You’ve convinced me to one click “Unbound”. Your ratings and reviews are always so right on. Thanks.

He’s a fighter (and we get a part of that “fighter” world) and I couldn’t put it down, but what they partake in privately is dark… So just to give you a heads-up in case you didn’t read my review yet. 😉

Still, even with it’s “dark side” the story and characters are sooo good. I’d venture to even say it’s dark side makes the sweet side that much better. Intense.

Like most of us here once I saw your recommendation for Unbound (and the fact I enjoyed After Hours) I was an easy sell. I completely agree with the fact it’s not the “usual” type of book I’d go for and honestly it took a little time for me to get over it and just into the actual story. Which wasn’t that hard with the way Cara McKenna develops her characters, I was “feeling” for them once I let go. However, trying not to give any spoilers, I was disappointed with the end. It was almost as if I was missing the last chapter or epilogue. Not that it was a cliffhanger but just ended rather abruptly. But like you said the writing style was definitely a 5.

I totally agree Rebecca. The book was fantastic but it was missing that epilogue. Too many little things left unanswered for me but I’ll get over i and just assume the best.

Oh my god. I read Unbound first …. awesome and then Willing Victim. Both were awesome and not my typical reads either. But I’ve become a fan of Cara Mckenna. She truly is gifted in her writing. I could not help but fall in love with her characters. In Willign Victim, Maryse you were soo right!!! The dark part which in fact is not for everyone was done so well that .. you did not feel traumatized ( nor did the character) but you felt a mutual bonding and growth between the characters. Can’t wait for more from Cara Mckenna. A new favorite. Thanks again !