X
You are here: Home / My Book Reviews / Bad Boys & Rock Stars / Book Review – Where You Are by Tammara Webber

Where You Are (Between the Lines #2)

I just wanted to kiss her, but that’s all I’d done the first time, and my intent wasn’t, apparently, as obvious as I’d thought.  Emma needed words. Declarations. We were more similar than I’d given us credit for, and I trusted in that knowledge and gave them to her. “I haven’t wanted anyone but you since the night we met. And as much as I value our friendship… being friends with you is not what I have in mind.”

Book # 2 in the “Between the Lines” series was also quite enjoyable and right on par with #1. It had such a good start!! I was sucked in and didn’t stop until the end. Not necessarily *squee* worthy, but certainly fun in a lighthearted, easy read that despite the occasional silliness, could be emotionally satisfying, too. And that is simply due to one particular character that I came to adore.

“I’ve never been a horribly possessive guy, Emma, and I know this is all sudden and unforeseen for both of us. But watching you with Reid was more than I could take. I don’t think my heart could tolerate sharing you again.”

Quick synopsis: Famous it-boy actor, Reid is reeling over the fact that Emma (his leading lady in their latest film) continues to reject him, despite his numerous and seemingly sincere apologies. You get the impression that he might truly be in love with her…

Losing Emma was a massive disappointment. One I’d like to reverse.

…and then every once in awhile, his thought process leads the reader to think that it’s all in the chase, and that he’s into the game, and not so much spoils, if he ends up the “victor” that is.

And then there’s supporting actress, Brooke (Reid’s love-of-a-lifetime turned arch-enemy) who is determined to quit her bad-girl ways and snag the perfectly gorgeous Graham (also in the cast) as her own. After all, they’ve been best friends for years, and he’s the only one who has seen her true self, and accepts her completely. The only one who knows her truth. The only one who has always been there for her. There’s a problem though. Emma (Reid’s conquest) and Graham (Brook’s conquest) have feelings for each other, and the two “top-dogs” aren’t having it.

I understand Graham in a way no one else can. I’ve been patient, waiting for him to see what could be between us, and he’s been playing typical clueless guy. Time to step it up. I am not letting Emma back in there.

So they set aside their differences to “scheme” as they go on movie their publicity tour. Thing is, the tour mostly consists of only Emma and Reid, together, which is the perfect opportunity to “get caught snuggling” and let the paparazzi run away with their stories.

Sounds good right? And it is! Fun, sometimes emotionally exciting, a bit angsty, but often irritating. But ya gotta finish it, cause you wanna see the oncoming train-wreck play out. The writing was consistent with the first book, and so were the characters, While it’s still YA (even though they are all “adults” now, there is *steam*… but not in detail)…

… the passion and emotion is there. Especially during the first quarter to half of the book. That first love intensity isn’t lacking in the least. The author really took her time for that part.

Hot shot actor (Reid) continues to be full of himself, and is still acting like a full-fledged bad-boy. Unfortunately, his family turmoil was missing in action, in this one, and I was hoping his private life would be a part of his initial emotional “growth” spurt, but his self-centeredness took center stage for most of it, instead.

Watching Brooke and Emma face off is possibly the most involuntarily hot thing I’ve ever witnessed. They’re subtle and perfectly civil to each other, while under the surface lurks a murderous biting, kicking, hair-pulling, bitch-slapping violence. The only thing that would have made it better, in fact – is if I was the inspiration for those vicious feelings. But no. It’s all for Graham.

I sort of get it. I mean, he’s good-looking. And he’s got that mysterious element about him that chicks are drawn to.

He’s got so much potential, and he’s *almost* there, but then he goes and makes quite a few harebrained decisions, and ya just gotta shrug and hope for the best in the next one…

Hot shot beautiful actress (Brooke – outwardly, the female version of Reid) actually ticked me off big time, as she was the perpetrator of all the drama that would ensue, and really… just wow. She should be ashamed of herself. Embarrassed. The depths she stooped to, to try and get what she wanted. She sure didn’t do her already low self-esteem any favors. And yet… her past, where she came from, her perception of herself, and her attempts at trying to be something “better” than what she thinks she is (and not better in a good way, better in a materialistic, narcissistic way),  allows the reader to somewhat excuse her outlandish behavior. She’s a bit broken, and a mistake made at a very young age between her and Reid has pretty much left both of their emotional stability in pieces. And in the process, they’re tearing everyone else up with them.

Graham… awesome, deep, honest, gorgeous, intelligent, brooding, beautiful Graham. Big heart, excellent sense of self, and because of his strong family (his support system) and his amazing upbringing, even though he too, has made mistakes, he has grown with them, despite them, and because of them. He doesn’t stay perfect throughout this novel, but gosh-darn he’s just so close to it. He’s so wonderfully grounded, that he keeps the story together. His unbelievable self-control (despite his intense feelings) is deliciously infuriating!!

I’m practiced in denying myself what I know I can’t have.

I just wish I could have had a book completely ensconced in him, and everything about him.  And at least he doesn’t let his broken-hearted experience from his past ruin his moment in the love-sun now. NO way. He gives himself completely, and… again. WOW. Almost every scene that Graham was in was a sigh-inducing one. Especially his new found “Alpha” side that his psychologist mother raised her kids not to indulge in. Because her words kept ringing in the back of his head, he kept his level-head, but… still. I certainly enjoyed his growl-y side.

At a photo shoot, watching Reid and Emma play up their “couple” for the movie publicity shots, Graham and Brooke watch from the sidelines…

“I don’t think I’ve ever seen jealous Graham before.” She squeezes my bicep and arches a brow. “Mmm, very alpha-male.”

When I scowl, she laughs at me again and I take a deep breath, feeling years less mature. “God, am I that obvious?”

I absolutely loved the chapters from his perspective.

And then there’s Emma. She’s the main character, and it went well, mostly. But I dunno. She’s not my favorite heroine. Emotionally, she’s kind of dull, and monotonous. The fact that seems to captivate so many, leaves me confused. Why? Other than her “eyes” (we get a lot of that, in this series), I suppose it’s her good-heart, and her self-respect that shines most brightly about her, and attracts everyone to her? *shrug* (maybe I’m just being “catty” tee hee!! Apparently I’ve got a little more “Brooke” in me then I care to admit 😉 ) But personally, there’s not much about her that stands out to me. I enjoyed her interaction with other characters, but it’s mostly the other characters that I remember.

The first half of the book really got me. The emotions were deep, the “love” was intense, and slow (but in a good way). I felt it all happening, coming together, becoming something big. The second half had me more exasperated then anything, and while I enjoyed the drama, I was a bit let down over the end. I was hoping for some of that big, deep, emotional connection that we were privy to in the beginning. Overall, some deeper moments, some fluffy moments. Misunderstandings that are eye-rolling, and in a more “adult” world, or maybe with more Alpha types that I enjoy so much, there might have been a bit more excitement, but overall, I liked it, and will certainly read book #3 (coming out in December).

I’m actually a bit confused as to where that one is going cause I was sooo certain… well you know. With the little hints here and there about “past true love” and deep attraction that still exists… That perhaps a certain couple of characters were maybe gonna… you know? After the free preview of book #3 (entitled “Good For You” – expected release date December 2011)… I’m not so sure anymore. 😉 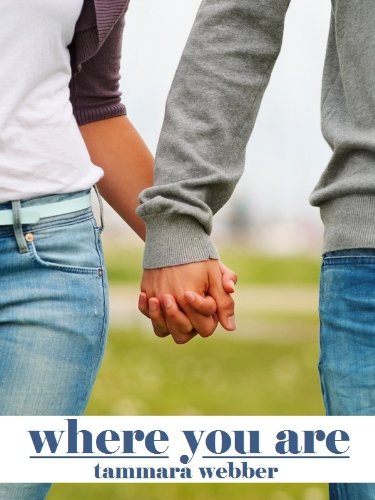