I have spent my wonderful Sunday cozied up with Dex on the couch and I couldn’t have chosen a better man to spend it with. Er… I mean “fictional” man, that is. 😉 *glances at husband*

Been dying to get to this book, but being that it came out just a few days before Book Bash, it just wasn’t in the cards for me. I was green with envy as my fellow Dex-lovers were swooning and declaring their devotion all over again, reading him together and I couldn’t. But I knew I’d have the last laugh. I’d get to be the girl in our group that gets to experience it for the first time (after everyone else has). I’m always a bit jealous of that girl, but this time it was me!

Yep. Precious time spent with Dex shouldn’t be dispersed in chapter by chapter increments scattered amidst book-party-mind-chaos. I could have tried to keep up and read it with you guys, but Dex doesn’t warrant my severely side-tracked mind. He deserved my undivided attention. I prefer devouring him whole and in one sitting for full effect and my day has come! And what a glorious day it was.

“Was I being an a$$hole just then?” I whispered to Perry.

So what’d I think? It was great! While it wasn’t my absolute favorite in the series (I suppose I prefer being “Perry” and wondering what Dex is thinking while experiencing his cocky aires – I wanna be on the receiving end of “Dex”

), I still loved being that close to Dex’s heart. And boy was it on display in this installment. Dex is in love. HARD! As Elf would say (I love Elf!!):

Ahhhhhh soooooo sweet. Yet, I’ll admit, I wasn’t used to that coming from Dex. At first I was slightly surprised at how… cuddly and affectionate (inside his mind, and directly to Perry) he was being. Dex is usually a bit of a game player, and I’ll admit, I kind of love that constant wonder and “chase” (in books).

However, at this point in the Dex & Perry love saga, if it were real life, THIS is the Dex I would have hoped to finally have. His continued non-chalance and cockiness would have driven me mad (and made me all crazy and insecure and stuff – nobody likes a needy Maryse

). THIS is the stuff loving relationships are made of and since I *heart* him so much, I’d be crazy not to take advantage of basking in his amorous glow while it was shining so brightly.

She knew how I felt. I couldn’t have been more honest, more clear out there in the forest with her, essentially handing over my heart. She had it and it just seemed like she didn’t want it. I couldn’t blame her but I also couldn’t give up; I’d given up on so much before. I was afraid I’d drive her away if I didn’t give her space, if I didn’t let things be. She’d told me that maybe we were only meant to be friends and though I couldn’t have disagreed more, if it mean having her as a friend or having nothing at all, I’d have her I’d always have her, in any form I could get.

Perry on the other hand was leaving me somewhat cold. His love was there in spades, but I didn’t get to be Perry and absorb it with her. In fact, I found that she was deflecting him and making him a bit too… love-antsy. He was finally (and still – considering the last book) putting himself out there and yet… *sigh*. Yep. Making me nervous in the process. Uncomfortable for him and a bit mad at her.

Screw the formalities, screw whatever had happened between us – I needed her like I’d never needed anything and I could swear that she needed me too.

But she told me to sleep well and retreated to her room the one next door, closing it between us. I felt like she shut the door on everything that was and could ever be. It was like a guillotine blade on my future, our future.

Maybe had this been from her POV, my feelings towards that very important step in the series would have had me melting, instead of nervous.

But no worries, Karina pulled a fast one on me.

And I’m not going to say anything more about that. *zips lips*

Nancy: Loved it. Can’t wait to be back in Perry’s head again though! I miss her.

Kirsten: LOL. I know what part you’re up to.

While Dex and Perry are feeling out their “new” situation there are a slew of “zombie-like” attacks in New Orleans (you know, kind of like the ones we’ve been hearing about here in Florida). Not your typical “zombies” but… you’ll see. The perfect opportunity for an investigation (along with the haunted houses and all of the Louisiana voodoo to investigate). Maximus (yes… the “ginger” that sets Dex’s teeth on edge and… well, let’s not even go where Perry and he have went ;)) is now an official part of the Experiment in Terror team. But that’s a good thing, as Max has connections in Louisiana that will help them uncover the zombie/voodoo priestess mysteries.

Elissa: I finished it on the car ride home yesterday! I have to say I wasn’t liking ginger n@ts at all but maybe I like him just a little now lol

Maryse’s Book Blog: Yep I knew all about Ginger n@ts because of her book “The Devil’s Metal” – nice crossover on that story…

And as in all of Karina’s “horror-ific” mysteries, the supernatural scenes in these will give you that adrenaline rush you’ve been jonesing for. And if you’re really only looking to read about more Dex and Perry (and you suffer through the scary scenes), there’s plenty of “them” in here too. Just don’t think it’s going to be an easy ride. They may call it “The Big Easy”, but there’s nothing easy about this.

Dex uncovers a lot more than who’s behind the evil lurking in New Orleans.

“You,” she seethed, her finger pointing at me again. I cringed a bit, feeling like she was poking at my soul. “You. I know you, I know about you! You’re the exception.”

Some things just aren’t mean to be, and “my” Dex was in full Dex mode by the end. 😉

Did I scare you? Good! Go read it. 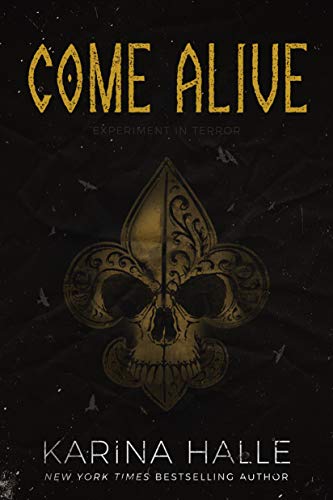 Great review MARYSE – I LOVED the way Karina Halle changed it up in this book with coming from Dex’s POV … Sooo much happened with Dex and his feelings and other things he discovered and things that happened to him throughout the book-I think I would have been LOST if it would have been in Perry’s POV-I love these books and you are the reason I began them. so thanku for introducing me to one of my most favorite series ever!!!
Also one of my favorite authors!

Great review! I just finished this book today and boy am I going to miss this series. I have devoured all of these books straight through and am going to have serious withdrawl from Dex and Perry-sigh. When is the next one coming out?

Great review Mambo Maryse but this was still a full-blown 5-star read for me. Maybe because you hooked me when I was looking to set up a summer reading list at end of June and I read the whole series in a week! I do miss being inside Perry’s head, but I do think we needed this last visit to Dexland. This story had some great character reveals as well as the usual EIT scary, edge of your seat, thrills. After raving about Travis for months, I now tell everyone I have a new book boyfriend – Dex!

Maryse you turned me on Dex and the entire EIT series. I always saw Dex this and that. So I said what the hell you never stared me wrong before. Let just say that I have caught up on all the books every the one that just can out. I LOVED them. I can’t wait to see what things Dex and Perry get into.
<3

Just finished, and I have to say that I love, love, love this series. I enjoyed seeing things from Dex’s side, but I just wasn’t feeling the zombie thing. It was a fun read, and I like the little tidbits of Dex’s past that are laid out like cookie crumbs in this book. I missed being in Perry’s head & I missed Pippa! Can’t wait for #8 this winter.