I have managed to finish this novel in a day (it is a fairly easy read), however I found my attention span waning many times throughout.

The story involves a potential “fairy” war, with Sookie a possible target, a separate murder mystery that Bon Temps faces yet again, some FoS discrimination against the newly outed Weres, and of course the usual “who does Sookie sorta love” drama.

A scene featuring a (typical – yet fun) argument with Eric:

“Can you doubt that I want what’s best for you?”

Victor laughed. “She knows you well, Eric,” he said and we both glared at him. “Ooops,” he said, and pretended to zip his mouth shut.

Perhaps I am jaded due to all the deeply passionate romance novels I have been reading lately, but this one simply left me discouraged. While there was a touch of romance, I found Sookie to be simply too fickle. While I understand the underlying reasoning (her apprehension towards what her true feelings are vs. what might be influenced by her blood bond with Eric), the whole situation left me annoyed. I do commend the “independence” of the character (not giving herself completely over to love), and insisting on complete honesty (without any underlying ploy). Her wariness cannot be completely avoided considering the past circumstances. However, there doesn’t seem to be enough emotional connection with Sookie. Instead, she mostly just toys with him. Considering how she felt in book 3, and how Eric now remembers their time together, why must it continue to be so challenging? She apparently still feels deeply for him, and Eric seems to be grasping at any possible way to forge a commitment, yet her continued resistance to him seems unjustified (as if the author might be creating the delay for the sake of stretching out the drama in the series).

“You’re mine,” he said. Then he noticed my frown and amended his words hastily. “You’re only my lover. not Quinn’s, not Sam’s, not Bill’s.” There was a long pause. “Aren’t you?” he said.

A relationship discussion initiated by a guy. This was different, if I went by stories I’d heard from the other barmaids.

The first half of the book bored me somewhat. It felt like a day to day list of Sookie’s activities (with the occasional bump in the road to shake things up a bit). Perhaps Ms. Harris had not exactly resolved where she wanted the book to go, but the feeling I got from the first part was that it was a writing warm-up session, by the way of a wordy day to day account of Sookie’s life.

She wakes up, she has coffee, she contemplates her roommates, she goes to work, someone gets in a fist fight, someone is drunk, she goes to bed (I was frequently disappointed here…as night time is the right time for surprise sexy vampire visitors, but alas, there was mostly no “nookie” for Sookie – tee hee!). Next day starts, she wakes up, tans, there’s a murder or two, some investigations, she goes to work, and on and on. Every once in awhile, Sookie has potentially meaningful conversations with other characters, but we are frequently left indifferent, as her erratic ruminations always seem to interrupt the flow between her and others.

By the middle of the book, I was somewhat satiated. I was not convinced, however, that Sookie’s apparent nonchalance towards Eric, suited the atmosphere of some of the scenes.

“This is best,” he whispered, and his voice had that accent I caught occasionally, that hint of a time and place that were so far distant I could not imagine them. “This is the best,” he said again. “This is right.”

I will admit that I am partial to Eric. I suppose that Ms. Harris may have steered us towards rooting for him as Sookie’s true love. I do suspect that the author may be changing her stance on this, which given my affection towards these characters, and Eric himself, leaves me feeling frustrated.

Don’t get me wrong, I will always anxiously await, and eagerly read, any book continuing the Sookie Stackhouse series, however, after the anticipation of the release of this book, I have been left nonplussed (just as I was in the last book – more of the same). My favorite books in the series are 2 and 3, but as a whole, other than the last two installments, the series has been great! The flirtation was fun, the romance and even the love triangle was exhilarating. There was love, along with action and danger, and these books were THE guilty pleasure that I could not resist. I feel that the series is ebbing. While the danger is still intense, and the enemies still abound, Sookie’s casualness is starting to irritate me… 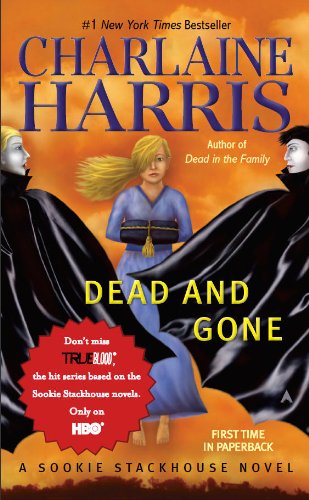 Hi Maryse, here are my comments on how I view this book.
I really like the Charlaine Harris’ Sookie Stackhouse novels.
At the beginning of Dead and Gone, we follow Sookie in a normal life; the kind of life I think she would like to have. But, with all her supernatural friends, it is unlikely to happen. And she knows it.
The reasons she gives Quinn to stop seeing him shows that she is looking for a man with whom she can share her whole life. She does not want a part-time lover.
Considering this, it is quite normal that she is not certain of her feelings towards Eric. It is true that she likes the sex with him (but so did she with Bill and Quinn), and the blood bond may actually have something to do with her attraction to him.
I like the way Sam is upset when he finds out she is still seeing Eric. I think he really loves her and that eventually she will have to face the fact that he may be more than her boss or just a friend. He may very well be her true love. At least, with him she would really have the kind of live she is dreaming of. A man that loves and respects her, that she can be with day and night, and with whom she can have children.
As for Bill, he probably is the one who loves her most, and because of that love, all he wants is for her to be happy, with or without him. He proves that his love has not limit.
And what about Eric who, even though he could feel that she needed him when she was kidnapped and tortured by the fairies, did not come to her rescue right away because he was tied up with something else. Will she really understand as he believes she will?
Do you know when the next book is due to come out?

Hi Louise! Thank you so much for giving me your insight on the novels. It’s so interesting that we all have different takes on what happened or should happen. I do admit I’m loyal to Eric, and think his character will prove to be MUCH more then just the “Bad Boy” or unfeeling, self-centered male he portrays himself to be.

I DO think whatever he was doing while Sookie was being tortured was important in the grand scheme of things, and I think he already had the “rescue her” part covered, which is why he didn’t show up himself. Do you remember all the times in the past books that he rescued her, or was there for her when Bill was not, or couldn’t be?

I agree with you both about Bill and Sam. They both love her (I thought Bill was horrible when he left Sookie in past books) but considering the circumstances of his own blood bond, guess us mere humans just couldn’t understand it 😉

I also agree that Sam would probably be the most suited to her needs (and it’s obvious she is attracted to him), but come on…when was the perfectly nice and sweet one, the “chosen” one (tee hee!!) Considering Sookie’s knack (and obvious love for) finding danger (just look at her very first attraction – a Vampire!), I hope to see the story continue with Eric.

But you know…come to think of it…I’m a sucker for a story with a love triangle (keeps the reading interesting), so I hope there will always be some emotional turmoil, no matter who she ends up with. If she just ends up with Eric, happily ever after, where’s the fun in that? Right?

Let’s see… the next book comes out May 2010, called “Dead in the Family”. From the synopsis, I have a feeling I will like it, but since I had NO clue what was going to happen after this book, the synopsis has already revealed a few spoilers (ack!)

Do you know when another book might be coming out after “Dead in the Family”?

I found it, Dead Reckoning, May 2011. I just had to go through your site a little further to find it. I just love your web site…I can find everything here for ideas of what to read. I did have another question. It seems that books come out sooner to if you have a kindle or similar reader, is that true? And if so…how much sooner do you get it before the books are in the store?

I luved your book girl, besides i really luv a good vampire story, like VAMPIRE KISSES,VAMPIRE DIARIES,TRUE BLOOD ETC ETC. YEAH BUT REALLY KEEP UP THE GOODWORK YOUR DOING GREAT!!!