NOTE: *for those of you who haven’t read the first two books yet — don’t read this, cause your not supposed to know this part yet.* Check out the series here: Jill Myles – Succubus Diaries Series Reading Order

Foreplay: A Succubus Diaries Prequel (The Succubus Diaries)
A fun short story (and again, I do mean short). We get the play by play of Jackie’s day, that leads up to her defining moment.

She starts her morning as a frumpy, insecure woman who gets bypassed for a promotion, then moves on to drowning her sorrows at a local bar, and being bypassed by the “meh” guys in said bar. It progresses to Jackie’s life changing moment when she stumbles in a dark alley, and her life as she knows it, ends.

…I ended up flat on my back in the alley, with him standing over me, holding my purse.

“Give me back my purse, thief!”

A sardonic laugh echoed in the alley, bouncing off the walls. “You’ve got to be kidding me.”

To my surprise, he offered me a hand, since I seemed incapable of getting up. I slapped his hand away and wobbled to my feet on my own, clutching a nearby Dumpster to help pull myself up. Once I was standing, I reached out for my purse.

He didn’t give it to me. Instead he got very still. The cigarette fell to the ground. “I’ll be damned.” …

…. He examined my face far too long, saying nothing.

You know how the saying goes… “Every new beginning comes from some other beginning’s end.”

“All part of the plan, Princess.” He looked at my shirt, then unbuttoned it down to my bra, exposing my pathetic cleavage. “Want to go visit an old friend? Say yes.”

Yup. Jackie wasn’t always the gorgeous red-headed bombshell, hanging out with other sexy angels, vampires and succubus/pornstars. Her life didn’t always include hot sex with two completely devoted hunky boyfriends that share her (albeit reluctantly). Nope. No exciting road trips that mostly lead to danger for her (woops – wait…OK, that part’s not a plus…). Well, to the reader it is. Anyway, all that to say, her life (or should I say, death?) is no longer boring 😉

Nope. Once upon a time, Jackie was an average female, working an average job, living an average life, and sorely discouraged by it all. But it appears fate interjected one day, and now we have an awesome series to read about!

My only complaint about this one? It was so short. Too short. While the play by play was interesting, it goes too fast. We do get an “a-ha” moment and then a whhaaaa? moment (yup! a tidbit of info that we didn’t know, and now we’re wondering about). But,there could have easily been more. Had it been slowed down a bit, and had there been more description in the interaction between Noah and Jackie (feelings, emotions, descriptive actions tee hee!!), this short story might have been just long enough to satisfy. But either way, ya gotta read it.

The end of this story? Oh, I knew what would happen, considering how the series goes…but how this one ended, what was said, was priceless. It made me giggle with glee.

While the author mentions it can be read at any point in the series (it is, after all, a prequel), I would say it would be more fun to only read it after book#1. The reason? I enjoyed being as clueless as Jackie, about what was happening to her in book #1. If you read this one first, you’ll know more then she does, and that might change the intended surprises. Or maybe not 😉 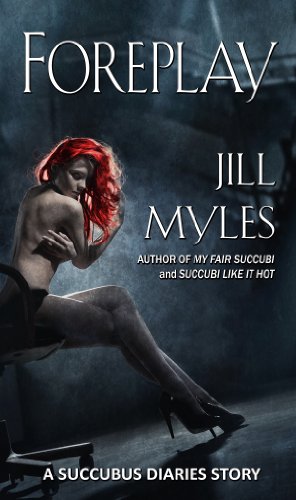