I believe these are “short” stories, but I hear (at least as per the first book) that they pack plenty of punch. I hope so, ’cause I can’t get enough of a good rock star series, and I KNOW I already love her full length “Sinners on Tour” series. I purposely waited for at least another one in the series (this one) to be released, because I have a feeling one book won’t be enough for me. Now that the first two are available, they should hold me over nicely for quite a few hours.

Check out the “One Night With Sole Regret” series reading order right here.

Would you like to read the synopsis? Why yes!! Ohh I like it already. His regular Dallas hook-up wants more, but figures he won’t, so she plans on ending it. 😉 This one sounds like it could have a dose of angst, too.

“For the five sexy rock gods of Sole Regret, finding love is easy, keeping it is hard.

For almost a year, Madison has been Adam’s hook-up every time his band, Sole Regret, tours through Dallas. But in spite of the way he sets her body ablaze with passion, the occasional night of rock-her-world sex isn’t enough anymore. She needs a commitment and knows that won’t fit into Adam’s rock-star lifestyle. Madison will take one more hot-and-heavy night with the sexy musician before she cuts all ties with him for good. Even if she must break her own heart to do it.

Life isn’t all bright lights and fan adulation for the lead guitarist for Sole Regret. Madison has seen Adam at his worst and still managed to bring out the best in him. Her cleverly concealed naughty side also brings out the beast in him. He’s never met a more tempting woman in his life.

Madison has no problem tempting Adam into her bed, but can she tempt his heart into taking a chance on love?” 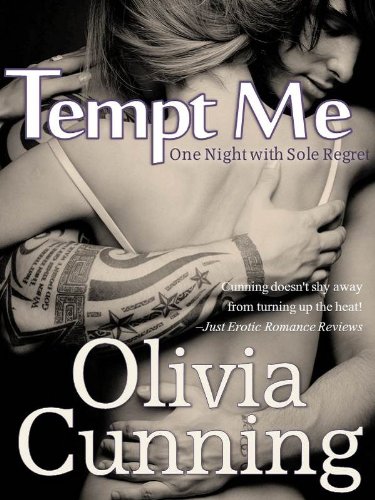 Just finished it. As always, Ms. Cunning doesn’t disappoint- I just wish this series was a little longer! I get so wrapped up in her bad boy rock stars that I don’t want to let them go!

Ooh! He looks just like the guy in the cover of ‘Easy’! I think he is the same one! 🙂

Just bought it! WHEEEEeeeee! I think your right, it looks like the “Easy” guy. hee hee

The first one was a short story, but good. Rock Stars + Tattoos= Yummy!

This is one where the cover alone makes me want to buy it…no need to read the blurb;)

Oh I know. I’m totally reading these next!

I have missed the first one but if I ever get my hands on these books I’m gonna read them:)

I am so going to have to get this one! I read the first book, Try Me, and just loved it. Of course, I wished it was longer but oh well. It was still fun to read. 🙂

Just finished it and loved it! The scene of Gabe’s stolen cell phone is hilarious. These naughty rock stars ROCK. Great characters, great story, and great sex scenes. 😉 The book ends kind of leaving you hanging, but in the acknowledgements, Olivia promises a novela for Madison and Adam, as well as, another one for Gabe and Melanie (from Try Me). Oh Goody! And her next rock star novel will be about Shade. Oh Goody Goody!

Glad I’m not the only one who’s first thought on the cover was “that looks like the guy from Easy!”

Can’t wait to get to this one on my list!

I’m stoked I’m not the only one to notice it’s the same cover model as Easy. He’s also on Darkness Awakened by Elle Chardou. Anyone know who he is?