You are here: Home / Home

There’s a new book coming out in just four days from the popular YA “The Immortals” series!

Night Star continues the epic love story that has enchanted readers across the world. In this installment, Ever and Damen face down bitter rivals, jealous friends and their own worst fears—all in the hope of being together forever. Night Star is guaranteed to mesmerize fans and leave them breathlessly awaiting the sixth and final book!

In celebration of the release of ‘Night Star’, St. Martin’s Press has released a new book trailer: 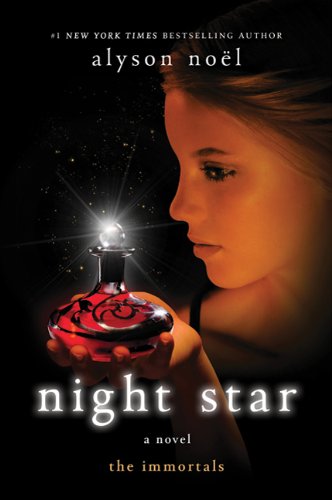 I’m back! I had a great time over at Lily’s Blog this week (I think my mom and I highjacked her blog comments) but we all had a good laugh (and we intro’d my mom to a few new hunky heros).

I figured I’d start the day off with some author news.

Is Sin Undone the last book in the Demonica series?

~ANSWER: Erm…well…sort of. See, here’s the deal: The Lords of Deliverance series, which starts with Eternal Rider (Lords of Deliverance) in April 2011, is set in the Demonica world and features a lot of the main characters. You WILL see the old characters, many of whom play large roles, so you’ll be caught up on who gets pregnant, gets mated, etc. Basically, the Lords of Deliverance is a continuation of the Demonica series, even though it features new players. I do plan a Demonica novella that’ll release next fall in an anthology with Alexandra Ivy, GA Aiken, and Jacquelyn Frank, and then I would really like to do a book for Reaver and MAYBE books for the Sem kids. The possibility for more Demonica books truly rests with how good my sales are and if the publisher wants more of them.

Half-Navajo Janet Begay possesses extraordinary power which is tied to the storms that waft across the desert. The only person who can control her when she’s caught in the storm’s evocative power is Mick, a dark-haired, blue-eyed biker Janet can’t seem to touch with her powers. He can wield fire and not get burned, and Janet’s never sure where he goes when they’re not together.

Together they investigate mysterious disappearances, which Janet fears are tied to her mother’s people, the mythical gods from below the earth.

Lisa Singleton has an unusual roomate, a golden dragon, a sexy warrior who has been sent to earth to protect Lisa from harm. Lisa comes from a long line of very special women with very special powers. Witches, black dragons, and demons will do anything to get their hands on her magic and the secret the women of her family have protected through the centuries

Nico and Andreas, two demigods, have been sentenced by Hera to spend their life on earth pleasuring woman after woman, falling in love with each until the women break their hearts…

MY LATEST REVIEW IS UP!! Total blurb jolt!!! And this one is currently #1 on ALL of Amazon Kindle right now. *thud*

Book Review – Make Me Yours by Melanie Harlow

FANTASTIC CYBER-MONDAY book deals! HUGELY popular ones on this list (and recent releases).

HOLY. MOLY. Look at all the amazing authors releasing new books tonight at midnight!!! And over the next few days...

DECEMBER IS GONNA BE AWESOME!

This is an amazing list!!! Also The Camp on 1/5. I literally can’t wait for this book.

"...Years passed. I got my life together. Cut went onto NHL stardom.

Then there was a text. I was drinking. There was a party. Cut was there…

I loved Cutler Ryder since the first moment I saw him. The only problem? He never knew I existed..."

A DEAL TODAY on my favorite facial cleanser!!! Since it's Cyber Monday I figured I'd post my favorite finds!! 🙂

The ingredients of this entire line are AMAZING, and so are the reviews, and I’ve been using them nightly for a few years now to wash off my makeup. LOVE IT!!!

This is the one I use: ACURE Brightening Cleansing Gel ➔ amzn.to/3qm8d39